The Jewels of Elvish 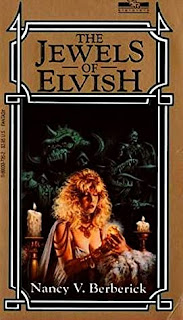 I first read The Jewels of Elvish a long time ago.  I don't remember when exactly, but it was before I started this blog (and I believe before I read Eragon the first time, because I remembered far less of this book than that one).  I don't remember why exactly I picked it up (it may have been because I read The Lioness, another book by Nancy Varian Berberick which I quite liked and read before starting this blog).  I remember, at the time, loving The Jewels of Elvish.  I discovered there was a second book, A Child of Elvish.  It took me many years to find myself a copy.  Of course, at that point, I knew I'd have to reread The Jewels of Elvish so I could remember what happened before moving onto the sequel.  Getting around to rereading it also took me years (like with finishing the Inheritance Cycle, Jacob's Ladder, and the Jeremiah Hunt trilogy).

With the looming threat of the Sorcerer, an ancient foe who was defeated many years ago, reappearing, the Kingdoms of Mannish and Elvish have decided to forge a peace treaty between their two races, who have been warring for generations.  As part of that treaty, the Elvish princess Nikia is wed to the Mannish prince Garth.  Nikia is also presented with the Ruby of Guyaire, the symbol of Elvish rule, by her father.

Sent with only her loyal handmaiden, Lizbet, to live in the Mannish Citadel, an alien place made of stone (unlike the familiar wood of her people's buildings), Nikia struggles to find her place in her new home among the Mannish.  She slowly makes friends, first with her sister by marriage, Gweneth (the wife of crown prince Fenyan, Garth's older brother), and then with Dail, Master of Bards and Garth's cousin, and finds her place as Lady of the Bards, tasked by Garth's father to create new songs to inspire everyone in the wake of the Sorcerer's incursions into their lands.  But she also fights terrible prejudice, as many Mannish mistrust the Elvish thanks to the long years of animosity between the two people.

But when war finally breaks out in the North, and Garth is lost and presumed dead, Nikia and her friends find themselves kidnapped by the Mannish mage, Reynarth, who has discovered that the Ruby of Guyaire is not just a symbol, but a powerful magical talisman.  Holding her friends and husband as hostage, the mage seeks to break Nikia to his will and use her to unlock its power.

It's funny, while I remembered very little, as I started reading The Jewels of Elvish, I had a vague recollection of Prince Garth.  In the first chapter, when both the Elvish and Mannish Kings speak with their children of the treaty between their people, as soon as Garth was mentioned, I knew he was the one who marries Nikia (even though King Alain hadn't said anything yet).  I didn't really remember Nikia, nor did I remember Garth's brother, Prince Fenyan or the two kings.  But I had a vague recollection that I knew and liked Garth.  And that recollection proves true: Garth is very likeable, and far more open to his circumstances (specifically that he is part of the treaty with the Elvish) than his older brother, Fenyan.  I also love his introduction to Nikia - chasing his favourite hound while covered in mud and dirt, hours before their wedding when they weren't supposed to meet.

I find it even funnier that I had no memory of Dail from the first time I read this book.  While Garth is Nikia's love, it's Dail who is far more present in the book, being her companion when her husband is sent off to war (and being by her side when she is kidnapped by Reynarth).  Dail is charming, funny, smart, and a good friend to her (even though he secretly longs for more).

I really liked Gweneth.  She was excited to have a sister and accepted Nikia without question.  She was also such a tragic character, having married for politics, just like Nikia (but without even real affection from her husband), and having miscarried multiple children (which led to Fenyan's distance).  I felt so sorry for her being stuck in Reynarth's machinations (which is another thing I vaguely remembered when talk of the miscarriages first sprung up in the book). Reynarth was also an interesting villain.  He wasn't remotely likeable, but he was also understandable, being driven by hatred for what he lost to the Elvish many years ago.  I also liked how he very much doomed himself, being caught up in a plot of betrayal against the Sorcerer, and himself planning on betraying the betrayer (not to mention he was a traitor to his people, using his magic unbeknownst to them to help the Sorcerer's troops). Needless to say, the characters are really what make this book.

Oh, I didn't mention Nikia either.  I liked her character.  She was a child who is forced to grow up thanks to her circumstances.  She's also got spunk and a heart of gold, even if it isn't always on display (she spends so much time finding her place among the Mannish that she isn't able to often, but this was best displayed when she helped Gweneth's son survive, and took the child from Fenyan so Gweneth could hold him before she died).  I thought there was a lot within Nikia that I could identify with, and so I found her story quite alluring.

The plot itself took some very dark turns once Garth disappeared and Nikia and company were kidnapped.  Prior to that, I was quite enjoying it as more of a political story, where Nikia is trying to deal with prejudices (I love the scene where she decides to stop being a victim, and plainly uses her magic rather than continuing to hide it).  But Reynarth's attempts to break everyone are dark indeed (and while it isn't shown, I should give a trigger warning: he does rape Nikia).

This latter part of the book, in my opinion, wasn't as good as the first half.  It wasn't just the darkness of what happens, but also the helplessness of everyone.  Yes, Nikia is able to find the strength to save everyone (and defeat even the Sorcerer with the Ruby of Guyaire), thanks largely to Reynarth's arrogance (he doesn't even bother to have a guard watch over Nikia because he's sure he's broken her).  And her friends are able to escape thanks to their own ingenuity (and some major helpings of luck).  But I had a hard time reading about just how helpless everyone was for so long (it felt like it took forever for Nikia and company to actually get to Reynarth in Seuro).  It's for this reason that I'm no longer counting The Jewels of Elvish as one of my favourite books (although I do not begrudge my younger self for liking it so much - perhaps I was at a different place then, and the themes within the book spoke more to me at the time?)

Well, whatever my changing perspective and thoughts on the book, it's now time to finally read the sequel, A Child of Elvish.
Posted by Shauna at 5:21 PM