A Child of Elvish 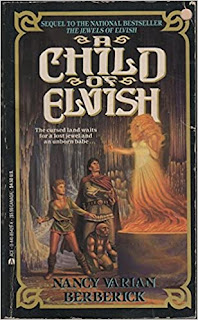 Oh boy. I've been looking forward to reading Nancy Varian Berberick's A Child of Elvish for quite some time now.  And unfortunately it did not live up to my expectations at all.

A Child of Elvish takes place some months after The Jewels of Elvish. Nikia is pregnant, and the pregnancy is going well, but there are doubts from Garth and their fathers as to who the child's father is thanks to Reynarth.  Meanwhile, the land continues to sicken and die from the Sorcerer's magics.  While Mannish lands are the hardest hit, this sickness is spreading eastward to Elvish lands, despite the Elvish mages' attempts to hold it off.  In the middle of it all, an Elvish hunter-scout (Kicva) and a Mannish farmer-turned-soldier (Joze) find Islief of the First People, who brings them to his Lady (the ghost of the long-dead queen Aeylin, or Ylin to the Mannish).  She tells them that she can heal the land using the power of the Emerald (sister-jewel to the ruby of Guyaire), but she needs Nikia's unborn child to do so.

I don't like saying this, but I thought this book was an absolute mess.  Where The Jewels of Elvish had a much tighter plot and only a few point of view characters, A Child of Elvish was all over the place.  The books starts out following Kicva and Joze for quite a while (this was largely pretty boring because a lot of it was kind of a recap of the first book).  Then just when it's getting interesting, it abruptly switches to Dail in Citadel.  From there it jumps around from person to person (including to some super random characters like Mother Ina, the nursemaid of Fenyan's son, who has POV for a single scene for no real reason).  It even hit a point where I wondered if we'd ever get back to Kicva, Joze, and Islief!

I also felt like the world itself had changed; while the basic trappings were the same, some of the deeper worldbuilding, especially around Elvish magic and beliefs, felt different.  Elvish magic was now built on prayers to their gods and goddesses, and their seven deities were suddenly loudly worshiped everywhere (the deities were all pairs: both a god and goddess together made one); in The Jewels of Elvish, I remember Nikia only mentioning her family's chosen deities who were honoured on her wedding cup (and she didn't invoke them through prayer when casting her small magics).

While I struggled to get through the majority of this book (I considered just stopping at multiple points because I honestly just didn't care about what was happening), there were two good things: Islief, and the book's ending (before the prologue).  Islief was a super fun character.  He was the last of his race, cursed to remain alive because centuries ago he stole the crown with the Jewels of Elvish for Aeylin; he would only be able to pass on once those wrongs were righted.  Islief remained deep within his mountain home for untold centuries, but journeyed out to help Aeylin's ghost right their past wrongs.  Because he had been so long away from the rest of the world, he delighted in everything he saw above (but also sorrowed deeply for the dying lands).  He also had a wonderful relationship with Joze (who he called Tall) because Joze, like him, felt everything so deeply.

The ending of the book was also really good.  One of the Elvish king's mages had been tasked with finding the Emerald and bringing it back to the Elvish in order to heal the lands.  Somewhere along the way, the Elvish mage's task gets wrapped up in his dreams of power and wielding the Emerald himself.  Joze and Kicva arrive in the chamber with the Crown to try to stop him, but he loses himself to the magic and is destroyed.  Joze, who is dying of the plague (he had been denying it, but Mage Aidan saw the truth of it in him in the end), insists that Kicva bring the Emerald to Nikia and her baby (she'd had the baby by this point, named Gai by Garth for happiness and gaiety).  Gai, with the ghost of Aeylin and Dail's help (for balance of male and female), heal the world.  Islief goes to return the Emerald to the Crown, and finds Joze not quite dead yet; keeping his promise to the young man (one I had long forgotten, truth be told), Islief gives his strength to Joze in the hopes that he can overcome the plague, and in doing so, passes on to be reunited with his people.

While it isn't something that I "liked," per se, I also need to mention Garth.  I felt so sorry for him throughout this book.  Garth wanted nothing to do with kingship or ruling, wanting to just be off hunting and enjoying the company of his friends and family.  But in A Child of Elvish, he gets maneuvered into being the Regent (his father, heartbroken by Fenyan's loss, abdicates in favour of his grandson, but as the child is very young, he needs someone to rule in his stead).  This is at a time when the lands are dying and plague is hitting the people.  Some of the lords of Mannish provinces (including Karo, the other grandfather of the young King) have also, in their desperation, decided that the treaty between Elvish and Mannish should be broken since the Elvish lands are as yet untouched by the Sorcerer's spells (and they don't appreciate the Elvish "scraps" they have been given).  Garth is dealing with impossible situations (plus the uncertainty of whether Nikia's child is actually his), and it hurt to see this good man so trapped by them.  I was also sad for his death in the middle of all this, even though I saw it coming (part way through the book, Nikia suddenly realized that while she respected and liked Garth, it was Dail who she actually loved; Garth's death meant that Nikia and Dail could be together, especially since Dail, as cousin of the Prince, would also be in line for the throne should everyone else be dead....)

So while there were some things I did really like in this book, overall I really struggled with reading A Child of Elvish.  It was all the more disappointing since I had long been looking forward to reading it. :(