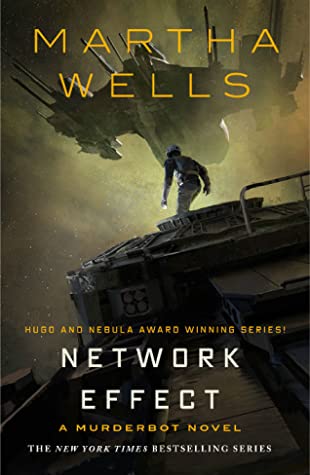 I completely forgot that Network Effect, the fifth Murderbot Diaries book by Martha Wells, was coming out this spring.  I also forgot that I put it on hold at the library.  So I was pleasantly surprised to get it last week! :)

I wasn't sure where this book would be taking Murderbot.  I thought the story ended quite nicely in book 4.  It starts out with Murderbot being contracted out to provide security for some of Dr. Mensah's family on a voyage.  Everything is going fine until their ship returns to Preservation space and is attacked by what looks like ART (from book 2).  While trying to protect Amena (a teenager from Mensah's family - I'm not 100% sure of what their relationship is as Amena keeps calling Mensah "second mother"), Murderbot and Amena are forced to flee the ship and end up on ART.  Unfortunately, ART is gone and there are strange grey people (possible aliens, or humans who have been modified by an alien remnant) on board.  After admitting to deleting ART, they get more than they bargained for with Murderbot destroying them (they mistakenly thought Murderbot was a human).

Network Effect took a lot of crazy twists and turns.  Some of the other humans from the Preservation mission got trapped along with them (their ship got pulled into the wormhole that the aliens took ART's ship through). ART hid a backup of himself for Murderbot to find.  Looking for ART's crew leads everyone to the planet where the grey people are from, which was a lost colony with quite a history.  Half of ART's crew were sent down to the planet, while the other half remained on a shuttle as hostages.  ART and Murderbot decide to make Killware as a last resort, which ART ends up deploying onto the shuttle.  The Killware is a copy of Murderbot's personality, and ends up calling itself Murderbot 2.0.  Meanwhile Murderbot 1.0 went down to the planet to save ART's crew but ends up getting captured itself, which leads to a battle against the enemy targetControlSystem.  Luckily Murderbot 2.0 found its way to Murderbot 1.0 to help.

Despite all the fun stuff happening, I had a really hard time reading this book.  The middle, when everyone was trying to figure out what was going on and where the missing crew was, really dragged (as did Murderbot and ART's feud).  Unfortunately it took me a lot longer to read this book as a result (all the other Murderbot books I couldn't put down; this one I had a hard time picking back up).  That being said, it was an interesting story, and I am looking forward to Murderbot #6 (ART asked Murderbot to join it on its next adventure, and Murderbot decided it wanted to, as long as it can come back to Preservation to visit Mensah.  This was the first time Murderbot knew what it wanted).

Also I forgot to mention, Murderbot 2.0 helped another SecUnit hack its governor module on the shuttle to help rescue ART's crew there.  This new SecUnit, which called itself Three, wants to help Murderbot too.  So I'm quite interested to see what happens with a second rogue SecUnit!