Die Volume 2: Split the Party and Volume 3: The Great Game 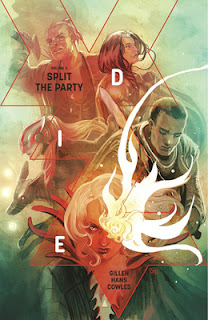 Huh, I didn't actually write about Die Volume 2: Split the Party on here before now. So I guess this post will have to remedy that!

This weekend, I finally sat down to reread Die volumes 1 and 2, and to read volume 3, The Great Game, for the first time.  The first time I read Volume 2, Split the Party, I wasn't really a fan of it, other than the fact that it was leading into something awesome based on the way it ended.  But last time, I read it without rereading Volume 1, Fantasy Heartbreakers.  But this time through, I read them one after the other and I liked Split the Party a lot more.

After defeating Solomon (and learning what happens to players when they perish in Die), the party splits.  Isabelle and Chuck lead the people of Glass Town away through a portal opened by one of the gods who took Isabelle's request literally: they are now the farthest away from Glass Town where they can be (and in a wasteland with no food).  Meanwhile Ash, Angela, and Matt make their way to Angria where they attempt to build allies.  Isabelle shows up to crash that party, admitting to everyone that the party is responsible for the destruction of Glass Town.

Split the Party has a lot more character development of the other characters other than Ash in it, so when read by itself it is a bit slower than the first volume.  But I found this wasn't the case when reading it right after Volume 1; it added a lot of missing context of what was going on in the world and in the lives of the characters, while not actually slowing down at all. 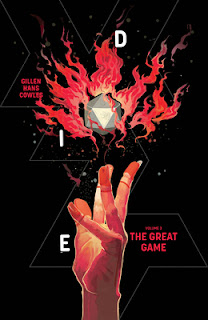 Then Volume 3, The Great Game happens.  With Isabelle's help, Ash has taken over Angria thanks to forcing Zamorna to marry her.  She intends to discover what exactly Eternal Prussia is doing in Glass Town.  Unfortunately, the people of Little England, who were eternally at war with Eternal Prussia, aren't too happy with Ash on the throne and declare war.  Meanwhile, Angela (who left after Ash was going to leave her in prison "for her own safety") joins up with Matt and Chuck.  They decide to travel to the Fair to get some answers.  Unfortunately the Fair are next set to appear in the Game Master's realm, a perilous journey far away.

The Great Game has some fantastic escalation of the story, as well as finally giving us some answers about just what is going on. I finished it feeling super excited to read more, but sad that it's not out yet.  I'll probably have to wait until either the fall or next winter to see how it all ends. :(