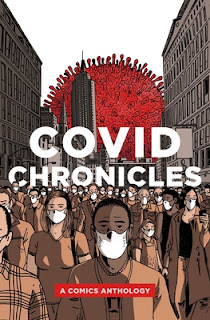 I took out a few graphic novels from the library recently and decided to just write one post on all of them together.

The first one was Covid Chronicles.  I was impressed that a graphic novel was already out talking about the pandemic (although honestly it's not that surprising since this has been our reality for over a year already).  This was a collection of short comics talking about the early days of the pandemic.  While there were some really great comics (I really liked the one that talked about the various pandemics that we've seen over the last 100 years or so), overall I found this a really difficult read because I wasn't ready to be reliving this stuff (which isn't really surprising since we're still living it).  I think it's a fantastic book that's going to have great historical value, but it's too soon for me to be reading or really thinking about it.

But kudos to all of those creators who documented it! 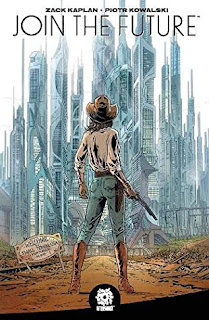 Next I read Join the Future by Zack Kaplan, Piotr Kowalski, Brad Simpson and Hassan Otsmane-Elhaou.  I liked this book.  Join the Future takes place roughly 50+ years from now.  Small towns are disappearing; their populations are encouraged to join the megacities where all of their needs will be met.  When no one is left in the town, terraforming machines descend and reclaim the land, erasing the town from existence.

But not everyone wants to sacrifice their freedom.  This is the story of Clementine Libbey who refuses to join; she wants revenge against the people who killed her family.

Clementine is a great character.  She's got real grit and refuses to compromise on her values.  She's also an asthmatic who is a terrible shot, which makes her quest for revenge all the more interesting because there is a very real chance that she's going to get herself killed.  She's also a minor, so the grownups around her don't exactly take her seriously (and there was one scene in particular that really pissed me off - because she's a minor, the state decided that they could sign for her and send her to the megacity when she refused).  You just can't help but root for her against these terrible odds.  I definitely recommend it! 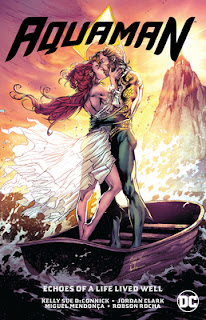 Finally I read Aquaman Vol. 4: Echoes of a Life Lived Well.  This is the conclusion of Mera's coma (and wedding to Vulko).  Mera gave Vulko some sort of command, but to carry it out, he decided he had to go through with their wedding.  Meanwhile, the princess, Andy, has been living with Aquaman in Amnesty Bay, cared for by their friends and all those sea gods and goddesses who are around now.  But one night she goes missing, and Aquaman will tear the sea apart looking for her, starting with his half brother, Orm.  Meanwhile, Jackson Hyde, Black Manta's son, goes to his father for help, asking for pieces of the Mech Lex Luthor made for him that is programmed with the personality of Black Manta's father (in order to use the mech to help find the missing princess).  This leads Jackson to Xebel where he decides to live up to his own expectations, not those of other people.
Out of all the Sue DeConnick Aquaman graphic novels I've read so far, this one was the best.
Posted by Shauna at 4:11 PM