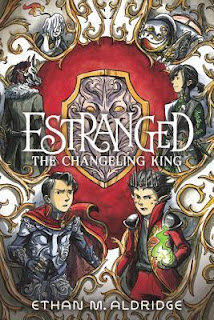 I was very excited to get my hands on Estranged: The Changeling King after reading Estranged a few days ago.  This one takes place a little while after the first volume. Ed (the Childe) is trying to adjust to the World Above, and King Cinder is trying to rule the World Below justly.  But magic is fading in the World Below, causing more and more troubles in the outer lands.  And Ed's parents want to visit the World Below to try to make sense of what happened to their two sons.

While I enjoyed reading The Changeling King, I didn't like it as much as the first volume of Estranged.  To me it felt like a bit too similar of a story - the World Below is in trouble once again, so it's up to Ed, Cinder, and Alexis, along with basically all their friends from the first book, to save the day.  Yes, there were differences - I wasn't expecting the mysterious queen to be Ed and Cinder's mother (I was honestly expecting their aunt, Hawthorne, to make a reappearance).  And the roots of magic were interesting, especially what needed to be done to obtain new seeds (I also misread that part - I thought the Queen said the Royal Family had to give a secret, which I took to mean the price was a secret or a memory, not that the process of tithing was secret). The end had a lot of running around and away from people, which again was very similar to the first book (where they were literally trying to outrun Hawthorne's guards).

I also felt that this story was mainly setting up for future volumes - the Wild Hunt will be after Ed now, and magic has changed within the world thanks to Alexis planting a seed in the World Above, so future stories will be exploring the consequences of that.  So while this story was fine, I am hopeful (and looking forward to) future volumes!