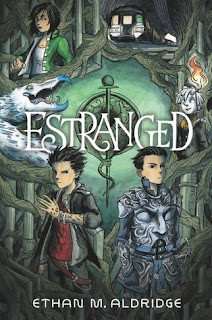 A friend of mine recommended Estranged to me when we were looking at some new library books (Volume 2 had just come out). So I put Volume 1 on hold, but it took awhile for me to get it (hence I'm reading it a few months later).
Estranged is the story of the Childe, a human changeling who was raised by faeries, and Edmund, the fae who replaced him. When a fae ball is crashed by the evil Hawthorne, who changes the king and queen into rats and takes control of the World Below, the Childe and his faithful golem servant Whick go looking for help. They quickly determine they cannot trust anyone in the World Below, and so go looking for the Childe's counterpart in the World Above.
Edmund of course wants nothing to do with the Childe, fearing he will take Edmund's family (the Childe's rightful family) away. But when Hawthorne's minions attack, Edmund unfortunately learns that Hawthorne wants him dead because he is the rightful heir to the World Below. And so he ventures Below with the Childe and Whick to try to stop her (and to keep his family safe).
I really liked how Edmund's big sister, Alexis, saw the three of them leaving and followed them into the World Below to find out what the heck was going on and why she has two brothers. She was incredibly welcoming to the Childe while not rejecting Edmund either, showing Edmund that maybe he doesn't have to hide who he is, and that he should try telling their parents the truth. Edmund was always terrified to do so because he was afraid of losing them.
Honestly, all of the main characters were great (and I liked the supporting cast too, especially the Nanny). I thought Ethan M. Aldridge did a fantastic job of showing how the two boys' upbringings changed them while also making them stronger in their own ways (although it was a shame that Edmund's art didn't feature more in the story beyond leading Whick and the Childe to him).
Estranged was at its heart about finding your place in the wider world, including you family. I thought it had some lovely themes about accepting people for who they are. I really, really enjoyed reading it, and I'm looking forward to Volume 2!
Posted by Shauna at 1:07 AM