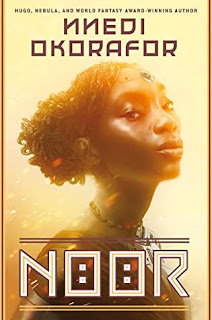 For my first book of 2022, I decided to read Noor by Nnedi Okorafor, one of the library books I have out.  I really enjoyed the worldbuilding in her Binti series, so I was looking forward to more of the same.

Noor follows Anwuli Okwudili (or AO as she prefers to be called), a young woman who was born wrong (and later in a freak accident which made everything worse).  Against the wishes of her family and the larger society, she's had many cybernetic upgrades, which allowed her to walk.  But the larger society of Nigeria looks at her as a freak and devil as a result.  So one day when she goes to a market, one which she always thought was quite safe, where the people knew her, a group of men attacked her.  She fights back, and kills them.  Fleeing for her life, she makes her way north towards the desert and the Red Eye, a disastrous sandstorm that has cropped up on Earth that is similar to Jupiter's Great Red Spot.  Taking herself offline, she fully intends to just go and die.  But she encounters a Fulani herdsman named DNA and his two remaining cows (GPS and Carpe Diem) who have also just escaped from their own tragedy.  And so they end up on the run together.

While the book is short (I think it's only 211 pages), I felt like it trudged forward, even during what should have been the faster paced action scenes. Which was odd, because then suddenly the book just seemed to end abruptly.  I will admit though, I did really enjoy the end, despite it feeling so hasty.

I also felt like it didn't spend enough time with the characters of the book.  I had a pretty good feel for AO, but I felt like I was being told about her, rather than being allowed to connect with her on an emotional level. That was true of the other characters too (although as you moved away from AO, I felt like you had less and less of a feel for anyone, including DNA).

All in all, I found Noor to have some interesting ideas, particularly about identity and fitting in, but it just never came together as a whole for me. :(