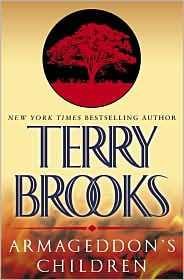 Armageddon's Children offers a terrifyingly bleak view of what nuclear war would do to life as we know it. Yet it also offers a view of the hope and determination that is the foundation of the human spirit. Even at the verge of total annihilation there are those who refuse to give up hope, fighting for survival, fighting for the future, fighting for love.
Posted by Shauna at 10:11 PM