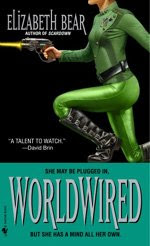 Well, here it is: the end of the Jenny Casey trilogy. Worldwired is about the aftermath of Scardown: what happens after the Toronto disaster and the starship Calgary going down. The alien Benefactors are here, but strangely silent. The UN is looking into the Toronto disaster. And Jenny Casey and her friends are still stuck in the middle of everthing.
I have to say that I liked Hammered and Scardown better than Worldwired. I think that Worldwired had too much going on with so many different characters that it wasn't able to follow Jenny Casey as much as I would've liked. But it was still a good story that was definitely worth reading. Elizabeth Bear did a great job with the whole trilogy! There were many great characters, and even though not all of them made it, it was great to know their stories. And I still like it that Jenny Casey's parts were written in first person.
Posted by Shauna at 12:16 AM