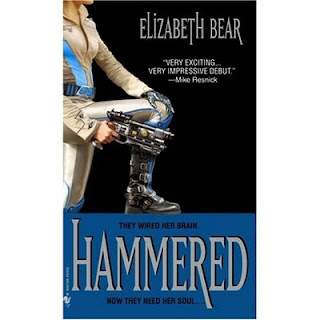 Hammered by Elizabeth Bear was one of four books that were recommended to me from the library recently. After reading The Weekend Man, I needed something that was faster paced and had interesting characters and dialogue. I actually decided to read this book first because of the cover quote by Mike Resnick: "Very exciting...very impressive debut." And I absolutely have to agree! Although it wasn't possible, I didn't want to put the book down! (And I am hopefully going to have the other two in the trilogy by the middle of this week!)
Hammered tells the story of Jenny Casey, formerly Master Warrant Officer of the Canadian army. Casey survived the army although lost her legs and her left hand in service. She was the only person to successfully adapt to her metal limbs, but now, thirty five years later, they are slowly killing her.
Hammered was full of many other interesting characters, from Razorface, the Connecticut warlord with a face full of metal, to Richard, the only successfully sentient AI. It was a masterpiece that remained glued to my hand all night until I was able to finish it a few minutes ago, leaving me aching to know what happens next!
Posted by Shauna at 3:55 AM