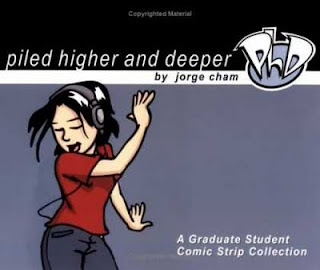 I didn't actually put this on the official List, so I'm counting it as an interlude. On my first Friday back in school, the Graduate Student committee had a guest speaker, Jorge Cham, present a talk on The Power of Procrastination. Jorge Cham is the creator of the comic series Piled Higher and Deeper, which depicts graduate student life at Stanford University. The talk was hilarious (when it didn't scare me off of grad school), and afterwards he had a book signing. Having never read the comic strip before, I lucked out and managed to get one of two copies of the first book that he had with him (my friend got the second copy). I've been reading the book ever since, reading a few pages whenever I needed a bit of a mental break.
Like Cham's talk, Piled Higher and Deeper is hilarious (while also somewhat terrifying - is grad school really like this?) This first volume collects the first five years of Cecilia, Mike, Tajel and the nameless hero's adventures in their respective PhD programs (Tajel is in the social sciences, while the other three appear to be in engineering). Whether on a search for funding or free food, their antics (and those of the supporting cast of characters) will have you laughing and crying (if you are yourself a grad student). I'm hoping to pick up the other volumes for some more sanity breaks in the future!
Posted by Shauna at 9:33 PM