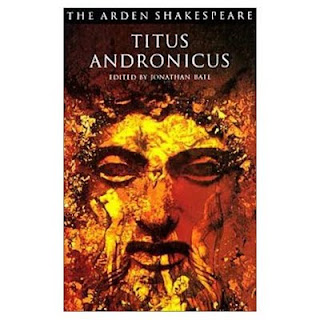 I have seen the Julie Taymor film version of Titus starring Anthony Hopkins, so I vaguely remembered some of the more gruesome parts of the story. But right from the get-go Titus Andronicus managed to amaze me. From Saturninus's strange paranoia (he was most paranoid that Titus was against him even though it was Titus who made him emperor) to Titus killing one of his four remaining sons, Act 1 was one of the wildest rides I've ever been on. This is probably the most senslessly violent play I've read of Shakespeare's work. While Hamlet has a giantic body count, almost all of the killing happens near the end. Titus Andronicus is a crazy blood bath that never wants to stop.
Posted by Shauna at 9:48 PM