Ever World: Entertain the End 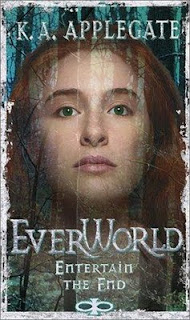 After everything that happened, the end of Ever World was a bit of a let down. Entertain the End itself was pretty good, but the very end seemed to come too soon. It was like the series should have kept going for a few more books.

Senna is dead, killed by April. And with her death, the group can no longer get home to the "real world." To make matters worse, they are fading; they have to choose: Ever World or the Old World. To David it's a no brainer; he is the first to disappear entirely. Christopher is now tied to Ever World because of Etain. And Jalil is free from his OCD. Only April is left wanting to go back. But even her conviction is waning.

With Senna dead, her army now has no leader. Like the group, they are trapped in Ever World. But they came prepared with heavy weapons and machine guns. They are a rogue force marauding the countryside. And the group is afraid they will join Ka Anor.
So they hatch a desperate plan to create the beginnings of a grand army to eliminate first one threat then the other. Etain's mother will gather the elves. Merlin will go find Thor's hammer, Mjolnir. The group will go to the Dwarves (who hate them because they destroyed their dam on the Nile and killed a few dwarves in the process) to make a deal: Etain's hand in marriage for the dwarves' help first in hiring fairy archers, and in tunneling into Hel's domain to free Thor and Baldur. Jalil sweetens the deal by offering to make the dwarves more technologically efficient. Of course, Hel won't be too happy with this, especially since the group escaped her before. Oh, and Christopher isn't happy with this plan either because he's in love with Etain.

April, David and Christopher succeed in freeing Thor and Baldur. But then Hel appears. April, like a lunatic, attacks Hel and is captured. Just when she believes she is doomed to be tortured by the death-goddess for eternity (and believes she deserves it for killing her half sister), Loki appears, accompanied by Merlin and Odin. The three demand that Hel release April, and then the four return to the dwarves. The book ends with a newspaper clipping, saying that the four kids have disappeared in the wake of Senna. So they all chose Ever World. But you don't get to find out what happened with the grand army. It's kind of a let down of an ending: while they succeed in their immediate goals, you don't get to know what happens in the end. I guess you have to use your own imagination to decide what happens.

So that's it. That's all of Ever World. Overall, the series is definitely worth reading. I really liked the characters (even if I wasn't very fond of some, like April, narrating). The group worked really well together, with their own strengths and weaknesses. It was a lot of fun to figure out what was going on in Ever World and how they were going to get out of the messes that seemed to spring up around them. I also loved how certain characters, like the Norse gods, kept recurring. Loki in particular was a great villain.

On the negative side, some of the things that happened (like the African adventure in Brave the Betrayal) didn't really fit and seemed to come out of nowhere. It was neat that Applegate used many varied religions and deities in the books, but some of the adventures, particularly near the end, seemed to be added on with no real reason or advantage to the plot. Both the African adventure and the Atlantis adventure fit this bill. They both just sort of happened to the group without fitting into the overarching plot. And what did happen in them could have come up in some other way. These adventures were like busy-work (like in the video game Baldur's Gate Dark Alliance 2 where bandits or trolls or something attacks every single time you travel from one city to the other), detracting from the main story. The books that were really good, such as Mystify the Magician, dealt very explicitly with the main plot.
Posted by Shauna at 5:59 PM

Dang. I wish we knew more about the ending.