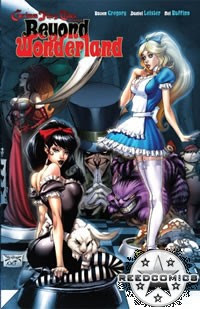 Beyond Wonderland takes place a few months after Return to Wonderland. Calie and Brandon have started a new life together in New York City. But Calie is suffering from nightmares of Wonderland. She tries to tell Brandon about what happened but he doesn't believe her - he thinks she's suffering from mental illness like her mother was.

So Calie attempts to go about her life but starts to question her own sanity. On top of that, Brandon goes missing (she believes he leaves her), then her best friend is brutally mauled to death in her apartment. And when her friends throw her a baby shower, a mysterious package shows up - with the dress she found in Wonderland in it.

While a little slow at the beginning, Beyond Wonderland really continued to draw me into the continuing saga of Calie Lidel. I can't wait to finish this trilogy off!
Posted by Shauna at 2:03 AM