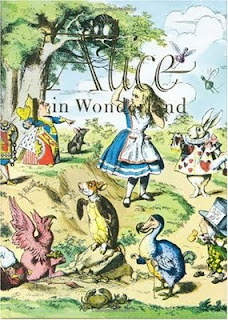 A number of years ago, I wanted to read Alice in Wonderland. So my brother bought me a copy as a present. But before I read that copy, I ended up reading Alice's Adventures in Wonderland in a treasury I bought for a Children's Literature class. With the wealth of Alice related stories that are now out there, such as the made-for-TV movie I really enjoyed, the video game, and even the new Disney movie, I decided that it was high time I reread the original Alice's Adventures in Wonderland. And it was high time that I read the version that my brother bought for me!
Alice is a ridiculous but fun romp through Wonderland. After witnessing a rabbit check his pocket coat watch and run off, Alice follows him through a rabbit hole. While attempting to follow him, she meets many strange creatures and has many strange adventures. From growing and shrinking in size, finding a never-ending tea party and playing crochet with live flamingos and hedgehogs, Alice never has a dull moment in Wonderland.
As I said, I originally read Alice for a Children's Lit course. I'm actually really glad that I did so, because I wouldn't have gotten the allusions had I simply read it on my own. Alice likes to try showing off her learning, and every here and there she attempts to recite what were well-known poems at the time the story was written. But Wonderland is a backwards place, and all of the poems turn out wrong. Luckily I was familiar with some of the original poems because I had read some of them earlier in the class, and the others were referenced within that edition of the book.
Alice is a quick read and it was fun to go back to it. But now I am excited because I am going to read Through the Looking Glass and What Alice Found There for the first time ever!
Posted by Shauna at 12:57 AM