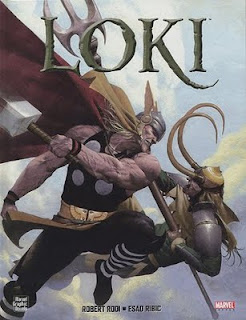 After seeing the movie Thor about a month ago, I realized that I know very little about Marvel's version of the god. Sure, I am relatively familiar with the Norse mythology thanks to my studies of The Legend of Sigurd and Gudrun. And in my travels I've seen a few Thor graphic novels that have caught my eye. Finally I decided to read one from the library.

The one I chose was Loki. This graphic novel gives Loki's point of view of events. The trickster god has defeated his step-brother and step-father and is now Lord of Asgard. After parading Thor's humiliated form through the streets, Hela, the Goddess of Death shows up asking for Thor's soul. Loki then debates with himself over whether he is going to have Thor executed. He speaks with those he has conquered, Sif, Baldur and Odin in particular, who paradoxically convince Loki (in his own mind) that he should kill his brother. But he gains other doubts along the way. And the whole time, Thor is locked in prison, slowly regaining the strength to free himself.

This was a really interesting look at Asgard from Loki's perspective. I enjoyed reading it and can't wait to get a hold of more Thor stories!
Posted by Shauna at 3:47 PM