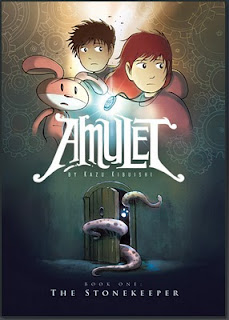 While looking for a couple of Bone books at Chapters, I stumbled onto Amulet. I read the first little bit in the store and enjoyed it. But rather than buy it, I decided to see if the Library had it. Lucky for me, they had the first three books!

Amulet is the story of Emily and her brother Navin. The story opens with an accident where there father is killed. A few years later, due to financial problems, their mom moves them to their great-grandfather's house in a smaller town.

While attacking the housework the first day there, Emily and Navin stumble onto their great grandfather's library. While looking through some things, Emily stumbles onto an amulet. Swearing her brother to secrecy, Emily takes the amulet with her.

Later that night, everyone hears some strange noises in the basement. Their mother goes to investigate and is captured by a strange creature. Emily and Navin follow it into Alledia, an alternate version of Earth. There they meet their dying great-grandfather, who gives Emily the choice to become the Stonekeeper. Choosing to embrace the amulet's power, Emily can now use her great grandfather's mechanical creations to go save her mother!

This first book was a really quick read. I really like Kazu Kibuishi's style, and can't wait to read more!
Posted by Shauna at 11:17 PM