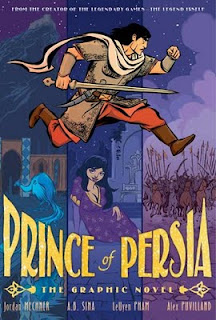 Prince of Persia: the Graphic Novel is a really unique story. It is actually a tale of two centuries, where two stories are intertwined. Two separate princes (one an actual prince, and one a man who eventually marries a princess) confront the corruption of the ancient city of Marv.

The first prince, Guiv, is almost drowned by his brother Layth. His sister convinces Layth to forgive him. But while he was under the water, he received visions of the palace in flames and a child with a sword. So even though he is forgiven, he leaves the palace in an effort to discover what the visions mean.

The second story is more about a princess than a prince. She sets out to discover what her teacher has cryptically riddled about. She disguises herself as a boy and heads to a tree marked with a symbol near an old well. There she discovers a mysterious man who hides in the ruins.

Prince of Persia: the Graphic Novel is quite a feat of storytelling. A little hard to follow in places, it is nonetheless worth reading if you are a fan of the Prince of Persia series. And don't forget to read the afterword by Jordan Mechner! That alone has made me want to read both the Arabian Nights and the Shahnameh (although it may be awhile before I have time to get to either of them!)