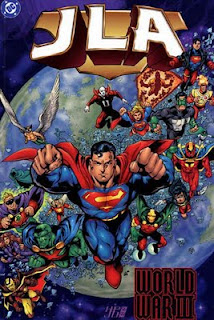 A friend recommended JLA: World War III to me the other day. He said it was a really good book. So I put it on hold and got it once he returned it to the library.

World War III is the story of a super weapon, Mageddon, speeding towards the Earth. Mageddon causes anger and rage, making people fight those they once considered friends. It leaves only death and destruction in its wake.

The JLA gets attacked in their own headquarters on the moon by Lex Luthor and a new Injustice Gang right when they discover Mageddon is coming. They try to warn Luthor that Mageddon is influencing him, but he refuses to listen.

Meanwhile, the world itself is going crazy. Countries are declaring war on one another andlaunching nuclear warheads left, right and centre. Those JLA members who were not on the moon have their hands full trying to save the world from itself.

World War III was a pretty good story, but isn't one of my favourites. I don't really like it when there are tons of superheroes whom I don't know. Yes, I recognized most of them (particularly the main ones), but there were just as many I wasn't familiar with. And with so many superheroes present in the JLA, there's no way to give them all screentime. But if you like the JLA, and having tons of characters throughout a story, you will like World War III.