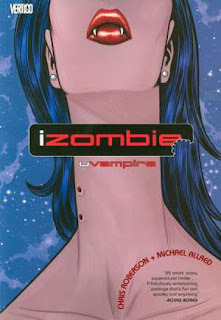 After enjoying the first iZombie title, I went and got the next two from the library (volume 4 is on order, so I'll get that after the library does!). Gwen's story continues in iZombie: uVampire. The first bit gave Scott/Spot's back story, about his upbringing with his grandfather. He's telling the story to a chimp, who then proceeds to speak; apparently his late grandfather's soul has been trying speak to him, and has inhabited the body of the chimp. He's now stuck though, so Scott asks Ellie for some help getting his grandfather out.

Meanwhile, Gwen goes on a date with Horatio mini putting. Unfortunately she just ate, so the memories from the last brain are messing with her head. Things aren't too bad until she realizes this woman knew her when she was younger; putting the woman's concerns to rest will involve Gwen confronting someone who knew her before she died.