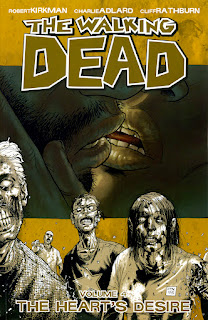 Volume 4 kind of surprised me a little bit at the beginning.  Rather than continuing immediately with what Rick and company were up to, it introduced a new character along (Michonne) with a character from Volume 2 (Otis).  But it did jump right back to the story after that.

At the end of volume 3, Rick and company were being kicked out of the prison they had found by one of the inmates.  But when he got his weapons, he accidentally released a hoard of zombies.  Everyone helps to clear the zombies out, wasting a lot of bullets in the process; the inmate is shot in the confusion and everyone can stay.

On the outside, the two characters who were introduced at the beginning of this volume made it to the prison.  Dealing with some zombies on the outside, those on the inside go to see what happened once their zombies are disposed of.

Michonne is a mysterious but deadly lady.  She's survived for who knows how long on the outside by herself, bringing along two armless zombies who generally keep the other zombies away from her. Even though they were important to her in the past, she doesn't hesitate to dispose of them in order to get into the prison.

Everyone is still reeling from the events of the previous book, but for the most part they seem to be recovering from things nicely.  Allen even volunteers to join a small group who are cleaning out the zombies from one of the other buildings.  But things start to spiral out of control when Allen is bitten...

The Walking Dead: The Heart's Desire was in many ways darker than the other volumes (well, volume 3 was pretty dark, too).  Friends are turning on friends now, and no one is sure whether Rick can take the pressure of leading everyone anymore.  A friend of mine warned me that the story gets depressing and I'm really starting to see that here.  I've got two more volumes out from the library right now though, so I'll give those a read then see if I want to continue from there.
Posted by Shauna at 12:15 AM