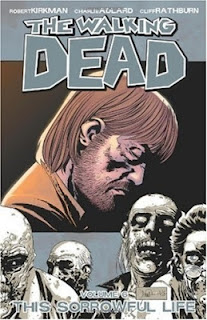 The Walking Dead Volume 6: This Sorrowful Life was a bit of a let down.  Rick, Glenn and Michonne were all taken prisoner by the governor of Woodbury.  Rick lost his hand, Michonne was tortured, and Glenn was largely left alone.  In Woodbury, they stage fights to the death in an arena filled with zombies, and the governor said he'd be sending Rick into the arena once his arm healed up.  But when the opportunity arose, it wasn't Rick who went into the arena but Michonne.

Anyway, This Sorrowful Life is all about escape.  The three of them need to escape Woodbury and the governor.  In some ways it was relatively predictable, which lessened my enjoyment.  And where Volume 5 had some nasty stuff in it, Volume 6 actually showed some rather nasty stuff (not everything, mind you, but way too much for my liking).  So overall this one wasn't my favourite by any stretch of the imagination.

But it did end on a real cliffhanger, so I'm going to get the next volumes from the library as soon as I can.
Posted by Shauna at 2:28 AM