Fable: Edge of the World 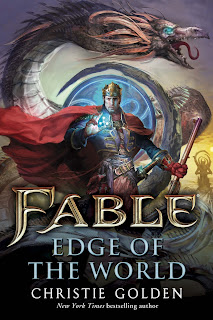 Disclaimer one: before I say anything else, the ending of this book made me mad. It was the same anger I felt when I read Firelight; I had no idea this book would end on a "To be continued" kind of note (but I had my suspicions when there were only twenty or so pages left and no ending in sight). To make things worse, I have no idea if book 2 will continue the story (or even who book 2 will be written by) or if I'm just supposed to play Fable: the Journey to see what happens (which I can't because I don't have a kinect). So the ending made me angry, which is a shame because I was really enjoying the book.

Disclaimer number two: reading Fable: Edge of the World was a bit difficult becgause when I play the Fable games I'm usually a woman. So it took a bit to get used to everyone referring to the king and his father, rather than the queen and her mother.

Ok, with that over with, I'm going to talk about the story with some big spoilers. You have been warned.

Fable: Edge of the World is a story within a story. There's a framing narrative about some dwellers, one of whom is fascinated by the Heroes. He gets into trouble for telling the children tales of Heroes because none of them will ever be Heroes. This is the whole 'prequel to Gable: the Journey" part of the book, which I didn't care about and found largely boring.

The main story involves the king of Albion, the Hero you played in Fable 3, keeping in mind that this is just a version of Fable 3 they chose to write about. When you or I play the game, our Hero could be very, very different from this one. I really wish they put in the disclaimer about that that was in Fable: the Balverine Order. Anyway, the king is marrying his true love Laylah, a girl from Aurora, when he receives some troubling news: the darkness from Fable 3 has returned, plaguing the land of Samarkand. Gathering an army, the king goes to stop this threat, leaving the kingdom in the hands of his new bride. He takes with him a few notable Fable 2 characters like Ben Finn and the priestess Kalin, leaving Page to help his queen. The king's journey is a hard one, being plagued by hollow men, balverines, sand furies and worse at every turn. But he fights his way to Samarkand's capital, gaining new allies along the way, chief among them are the sand dragon Percy, who is in reality some magic thing that serves Heroes, and Garth, the Hero of Will from Fable 2. The king uses his allies and army as a distraction, hoping to secretly enter the city and capture the Empress. But things do not go as planned; the king finds himself captured.

Meanwhile, back in Albion, Laylah finds herself clashing with her husband's head of security, Jack Timmins. She finds solace in the friendship of Page until Reaver appears and weasels his way into her inner circle. He tricks Laylah into believing both Page and Timmins have betrayed her. Once the two have fled Bowerstone to escape imprisonment (and in Timmins' case execution), Reaver in actuality betrays her. Forcing her to betray both her people and the location of her husband's Sanctuary, she desperately sends word to Page through her husband's dog of what has happened and how she is sorry for doubting the former rebel.

The last time I read a book that split the action with political intrigue was Jon Sprunk's Shadow's Lure; I didn't like the political stuff there and was worried I wouldn't like it here as a result. Luckily that wasn't the case; Christie Golden wrote both plots so well that I constantly wanted to know what was happening in both of them. There were even some points where I was more interested in Laylah's tale than the king's! I love reading books by Christie Golden and Fable: Edge of the World was no exception. I just hope this story will be continued by her and soon!
Posted by Shauna at 12:39 AM