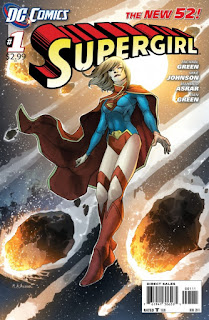 I saw this at the library and had to take it out. Sure, it's a pretty familiar story: Kara wakes up on Earth to find the infant cousin she was supposed to take care of has grown up. But this time, things differed. Kara has no memory of being sent. I don't think she was sent to take care of her cousin either. Kara wakes up on an alien planet where people are babbling at her in an alien tongue. Well, not just babbling; these people are in giant robotic suits of armor and they're trying to restrain her. She fights them off with confusing new powers, until Superman shows up. But she doesn't believe his story that Krypton is dead and HE is the infant cousin she held seemingly days before.

This leads Kara to search for a way back to Krypton to discover the truth for herself.

One thing that popped up were the Worldkillers. They were beings engineered by Kryptonians to literally kill worlds. Four of them have awakened with fractured memories, much like Kara. Their story was rather interesting and I'd really like to know what happens to them next.
Posted by Shauna at 2:28 PM