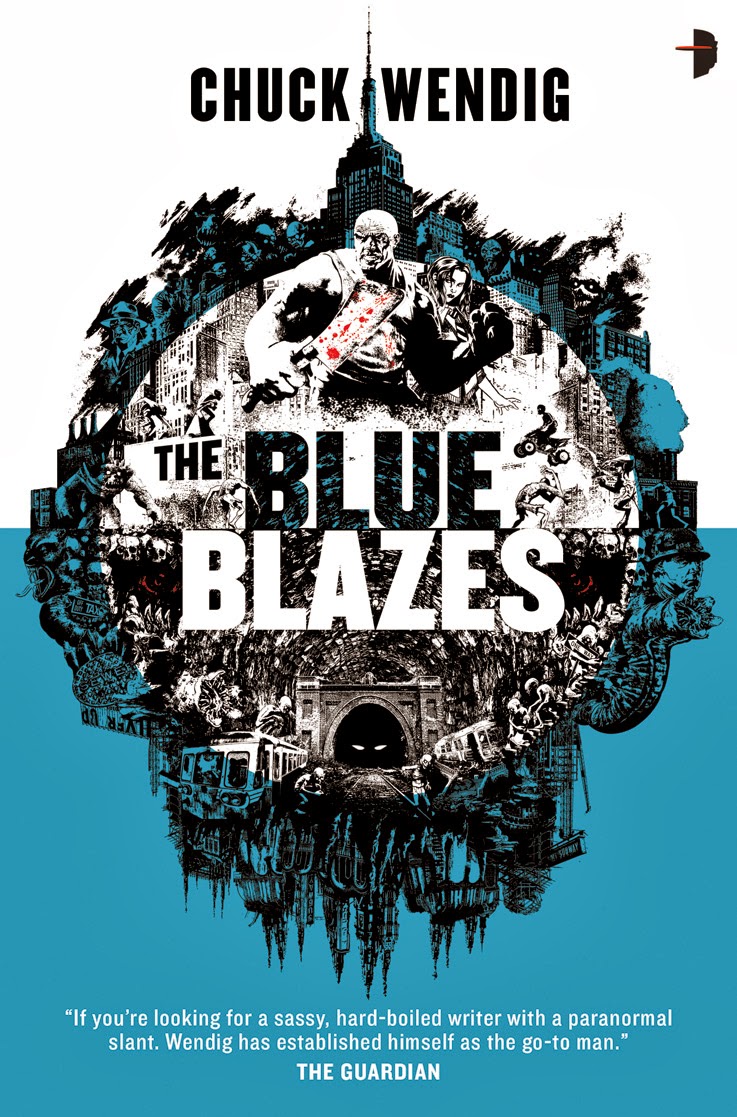 I saw Chuck Wendig's The Blue Blazes at work awhile ago.  I thought it sounded interesting, so rather than take it out at the library, I decided to buy it on my Kindle and read it at my leisure.  And after reading the No B.S. Time Management for Entrepreneurs, I really wanted to read some fiction; while I have lots to choose from, in the end I decided on the Blue Blazes.

The Blue Blazes is the story of Mookie Pearl, a mountain of a man.  He's part of the New York Organization, the mob that controls, among other things, Cerulean, aka the Blue Blazes.  Cerulean is one of the five pigments rumoured to be in the underworld.  And the underworld is below New York City; years ago the Sandhogs blasted into it while building tunnels, revealing a world of gobbos and the like.  Those in the know struggle to keep the underworld out of our world, all the while grabbing Cerulean for themselves.  You see, Cerulean has some unique properties: it allows you to see the gobbos and other creatures for what they really are; it also allows you to find more Cerulean.

So anyway, Mookie Pearl.  His world falls apart when his Boss announces he's dying of cancer.  To make matters worse, his daughter is stirring up the pot, talking the other gangs into going against the Organization now that the Boss is weak.  And just when things seem bad, all hell breaks loose, leaving Mookie in the middle and unsure where to turn.

A really neat touch is that, at the beginning of each chapter, there are scraps from the journals of John Atticus Oakes, the self-styled Cartographer of the Great Below.  His journal entries tell of his adventures mapping the underworld and searching for the other four pigments.  I thought these were a really neat touch, and I always looked forward to reading them.

But overall I had a really hard time connecting with the story.  I liked a lot of the characters, but something about the book just didn't keep me interested, especially in the first half of it.  I was originally thinking it was the writing style, as this is the first book by Wendig that I've read.  But I came across a review on Amazon where the reviewer said that they liked his other books, but had a hard time connecting with The Blue Blazes.  I also came across an interview with Wendig, where he says the "hardest thing for me was that this book was very, very worldbuildy [...] The trick was to not let the worldbuilding be the story driver."  After having read that, I actually think that was the biggest problem about the book: the story didn't seem to really get going until around halfway through the book, quite possibly because of all the worldbuilding that needed to be crammed in.  But I am glad I actually finished The Blue Blazes, rather than stopping halfway through.  As I said, the characters were all rather interesting (particularly Mookie) and the story took some interesting turns.
Posted by Shauna at 4:18 AM