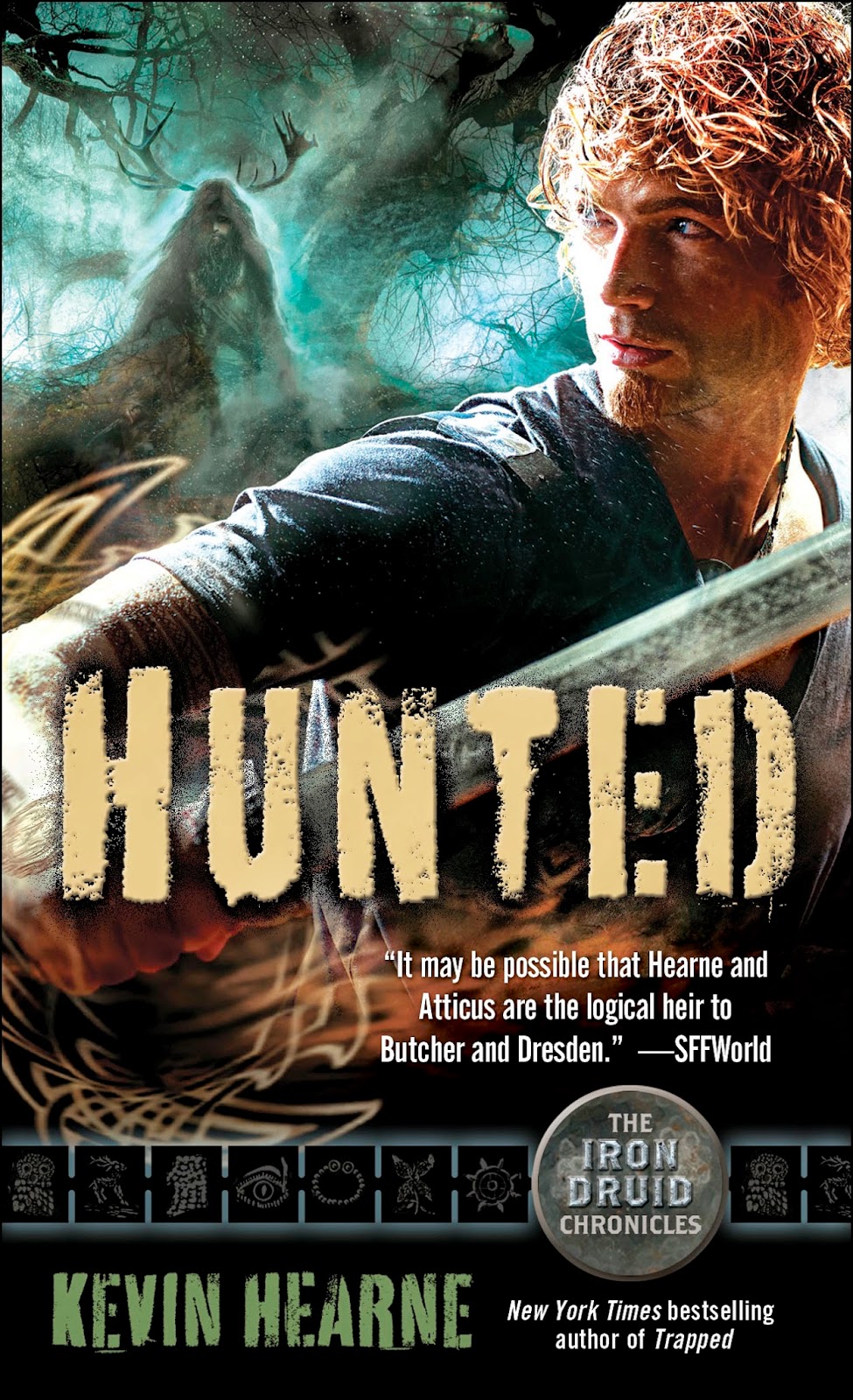 Hunted, book six, is the last Iron Druid Chronicle I'm going to read for awhile.  I know that book seven, Shattered, is out now (it came out about a week ago).  But I would like to go and read some other things in the immediate future (plus that will hopefully bridge the gap between books seven and eight, whenever eight comes out, a bit better).  So with that in mind, I'm going to be giving tons of spoilers in an attempt to record (and help me remember) the story thus far.

Hunted really started with a bang!  It starts exactly where Trapped left off - after defeating Fenris, Atticus, Oberon, and Granuaile were doing a "druid world tour," checking out the world and all the ways to Tir Na nOg.  But when they returned to Europe, Diana and Artemis, the Roman and Greek immortal goddesses of the hunt, are lying in wait for them.  The Morrigan appears and battles the two goddesses of the hunt, buying Atticus, Oberon, and Granuaile time to run away.  But as she is fighting them, she also talks with Atticus.  It's a moving, beautiful conversation (the Morrigan confesses she loves Atticus and that she was trying to change her ways but discovered that being a goddess made that impossible).  The conversation is abruptly cut off when she dies.  Yes, the Celtic goddess of death is killed in battle.

From that point, Atticus, Oberon, and Granuaile must flee across Europe.  Following the Morrigan's last instructions, they are running as fast as they can to England; according to the Morrigan, getting to Hearne's Forest is the only version of events where Atticus manages to live.  Along the way, they are being attacked by vampires, Svartalfar (dark elves), and an arcane life leech.  The gods have decreed that this is a contest between Atticus and the goddesses of the hunt, so no other gods are able to directly interfere.  Of course that doesn't stop Neptune and Poseidon  from stirring things up when the party has to swim.

Also along the way, Atticus gets shot in the head.  Granuaile and Oberon believe him to be dead and bury him in the earth; luckily his untested soul catcher charm works, keeping his soul in his body until he is healed.
Once they make it to Hearne's Forest, they become the guests of the ghost, who helps them deal with the Olympians.  While they cannot be killed, Atticus was able to dismember them with his sword (he traded Moralltach for Fragarach from Manannan in the previous book) and them "store" them in the earth.  He uses this to catch the two goddesses and force Jupiter and Zeus to come down and speak with him.  From here they are able to settle their differences, meaning the immortal gods will no longer be after Atticus.

After this point, Atticus goes to confront Midhir, a member of the Tuatha De Danann whom he believed was orchestrating these events.  When he arrives, he is nearly killed by some very hungry fairies (he calls them pie-mouths), discovers Midhir dead, and has to get by a manticore who was left to kill him.  This was a really long chapter, made doubly so because he was almost torn apart by the pie-mouths and couldn't heal (and was literally shambling around Midhir's house).  He learned that Midhir was high up in the conspiracy against him, but clearly not the leader.

One last thing: Loki was running around too.  On the run through Europe, Lokie showed up in Poland.  Atticus bargained with Malina's coven (who has relocated to Poland) to charm him - in return he would clear Poland of vampires.  Loki managed to get free, but before he did any major damage, his daughter, Hel, brought him to her world.

Oh yes, and as a parting gift, Atticus went to the time islands and discovered his arch-druid was very much alive.

So that was the events of Hunted.  It wasn't my favourite Iron Druid book, but it had some pretty crazy moments.  I'm looking forward to Shattered when I eventually go and read it.
Posted by Shauna at 11:20 AM