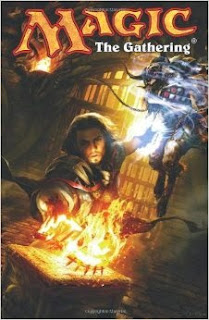 Wow, it's been awhile since I've read anything Magic the Gathering.  According to this blog, the last thing I read was the Shadowmoor anthology, which I read back in 2009.  I've read other books, but that was before starting this blog (so pre-June 2008).  It's been even longer since I've read any comics.  The only one I honestly remember reading was the Nightmare comic, which would have been sometime around 1995 when it came out (I liked that it was a standalone comic, but I admit it was a bit confusing at the time.  I've since reread it and it made a lot more sense to me.  I guess it was an issue with my age - I may have been a bit too young to get it at first).

Anyway, so I picked up Magic: The Gathering Volume 1, which was written by Matt Forbeck and drawn by Martin Coccolo.  It's the story of Dack Fayden, a planeswalker thief.  He steals an artifact from the Cult of Rakdos on Ravnica.  When he finally manages to catch his breath after doing so (the Cult was not happy with him liberating them of their artifact), he examines it and discovers that the lady who wielded it last was the one who destroyed his village.  So he sets off to Innistrad to find her.

I definitely enjoyed reading Magic: The Gathering Volume 1 (wow I wish it had a better title than that).  But I found it a bit short.  And unfortunately the library doesn't have the second volume in the series (or any of the other ones).  So it's going to be awhile before I can read any more (and find out where the heck Fayden went at the end of this - I want to guess whatever plane the Arabian Nights set takes place on (Arabia?) but I have a feeling I'm wrong).

I also want to say, I love the idea of a Planeswalker thief.  Once he gets a hold of something, how do you stop him?  He can just waltz right off of your plane!  Awesome!
Posted by Shauna at 3:44 PM