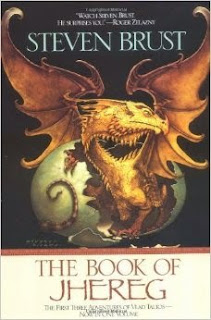 I can't believe one book can change my mind about a character so completely.

Up until this point, I've really enjoyed the adventures of Vlad Taltos.  Sure, there are issues with the stories, but I've felt like they were mindless fun reads.  All of that changed when I read Teckla.

Teckla is about Vlad's wife Cawti getting caught up in an Easterner and Teckla revolution.  Vlad doesn't want her to be part of it.  But instead of trying to talk it out civilly, they get into argument after argument.  Then Vlad goes and sulks for awhile cleans the apartment or wanders the streets, goes and talks to people, then repeats it all over again.

The start of the book was really weird.  A revolutionary guy by the name of Gregory shows up at Cawti's and Vlad's.  He tells them that a fellow revolutionary, Franz, was murdered.  This is the first that Vlad had heard of Cawti's involvement with (and really the existence of) said revolution.  So after Gregory leaves, the two of them go on a long walk and argue.

I'm going to add here that it took me awhile to figure out this was exactly what Vlad was mad about.  Their argument wasn't detailed in any way, so I wasn't sure what the issue was.  I thought that maybe Cawti had gotten involved with these people and maybe slept with someone.  But no, she was just involved and I guess Vlad didn't want her to (because it could get her killed, too, I think).

Vlad keeps trying to dissuade Cawti.  But every time he tries to "talk" to her, he makes sarcastic remarks or just starts off angry, which sets her off, too.  So of course nothing gets resolved between them.  At one point Loiosh actually tells Vlad that this has been happening (which is when Vlad finally tries to have a conversation with her, but of course it's a bit too late because she's already moved out).

I'd like to point out here that Cawti never felt like a real person, even though this book was in some ways about her.  That was a real shame in my opinion.  It was almost like Vlad had her on this pedestal, thinking that this was what she was; he never seemed to know (or actually want to know) the real person that she was.

So anyway, in the middle of their marital issues is the revolution and the Jhereg who owns the piece of the city where the Easterners live.  That guy first wanted Vlad to kill Franz (but Vlad turned it down, not really knowing anything about the revolution at that point).  And then wanted Vlad dead....you know what, I honestly don't remember WHY he wanted Vlad dead.  In the middle of the repetitive and boring action I lost track of why.  Anyway, so Vlad needs to stop the assassin, stop the other Jhereg, and stop the revolution so his wife doesn't get herself killed since she won't listen to "reason."

At one point, Vlad even decides that the only way to save her life is to kill all the leaders of the revolution (who happen to be Cawti's friends).  This goes directly against his whole moral of not killing Easterners.  Loiosh also didn't like that plan and said as much, but couldn't come up with a reason why they shouldn't do it.  The only thing that stopped them was the appearance of a ghost (which, while plausible in the setting, seemed kind of weird.  Why couldn't he have had second thoughts when he was about to go through with it?)

Honestly, anytime Vlad was talking to one of the revolutionaries was kind of painful to read.  He was accusing them of sticking to their ideals at the cost of innocent people's lives while he was honestly guilty of the same (remember, his solution was to kill everyone at one point).  It was also tough to read because Vlad and the revolutionaries both firmly had their minds made up about what they believed and neither side (with maybe the exception of Kelly, the revolutionary leader) was willing to even listen to the other side's viewpoint (at least without bringing their preconceived notions firmly into play first).  That was fine at first, but when it kept happening again and again, I really lost patience with the whole thing.

One thing that I found really interesting was that the revolution in Teckla reminded me of the Occupy movement in 2011, even though Teckla was written in 1986.  As far as I can tell, there wasn't anything in the early 1980's that was similar (although I admit I did only a quick Google search, so I might be wrong).

So yes, that was my opinion of Teckla.  I really didn't like it at all.
Posted by Shauna at 8:25 PM