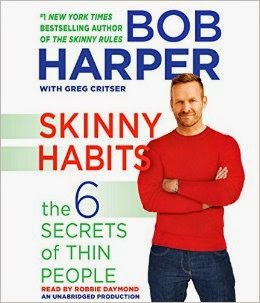 I wanted to read Skinny Habits: the 6 Secrets of Thin People because I was genuinely curious. Are there things that people who seem to have willpower and lots of healthy habits do differently than other people? I've actually chatted a bit with my mom on this topic because she can go to a party and say no to a piece of cake. Even though, like her, I don't really like cake, I find myself saying yes to having a piece (and often regretting it). Well, let's see what Bob Harper has to say on the topic!
As the title suggests, Harper believes there are six habits "skinny" people (I think he actually means "healthy" people) do: make contingency plans, consciously push back, reengineer their environments, challenge themselves, rest for success, and dress for thin. Some of them seem pretty straightforward (for example, when you're well rested it's easier to eat healthier because your brain isn't in need of sugar to stay awake and focus). Some of them I wasn't sure what he meant (push back against what?) And some I was genuinely interested in the strategies (how do healthy people make contingency plans)? Well, only one way to find out: let's read!

The book starts off with some basics on how the brain works. I have a degree in psychology, so nothing was really new to me, but I read it anyway as a refresher (and to see if there was anything new since I got my degree). After that comes the habits.

I really liked the chapter on contingency plans. Harper starts out by explaining the power of if/then statements ("if I have to go to the party, then I will talk to x people before hitting the buffet table"); if/then statements are a useful tool for helping you change ANY habit, so this is great knowledge for everyone to have!

The next habit, pushing back, is all about arming yourself with rational thoughts so you can push back against the irrational thoughts that pop up when you slip up. So like going back to myself, if I were to eat a piece of cake and catastrophize the experience ("I'm such a screw up, I'll always be unhealthy" sort of thing), this chapter gives you the tools to fight those thoughts.

Habit 3 (halfway through the book!) is all about reengineering your environment. Harper talks about changing your social environment to have more healthy conscious friends and changing your physical surrounding (particularly your micro environment) to reflect better eating habits, too. Things like taking cookies off your counter in favour of a fruit bowl or using a smaller dinner plate.

Habit 4 is to challenge yourself. Basically, Harper is saying that you need to have hobbies and interests that you are passionate about and that will keep you learning. People without hobbies often turn to food out of boredom.

Habit 5 is all about getting enough rest. Harper talks about both getting a good night sleep and general relaxation to beat stress. In particular, he looks at the awesome health benefits of meditation, yoga, and belly breathing.

The final habit is to dress for thin. This goes back to the whole idea of "fake it till you make it" with the goal of fooling yourself.

So those are the six habits healthy people have. Harper doesn't say anything revolutionary; these six habits are all common sense. They're also backed up with science, which made Skinny Habits a good read if only to refresh myself on that (particularly the psychology related to these habits!)
Posted by Shauna at 1:10 AM