The House of the Four Winds 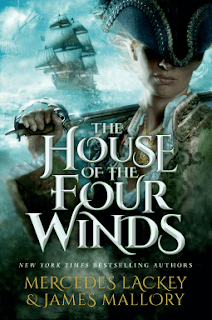 Huh.  So apparently it's been over two years since I last read something by Mercedes Lackey.  While you can't tell from this blog, seeing how I've only reviewed four of her books here, she's one of my favourite authors.  That being said, I've never read any of the books she co-wrote with James Mallory (The Enduring Flame, The Dragon Prophecy, etc).  Not for any specific reason.  I was just super caught up in first Valdemar, then the 500 Kingdoms.  (I also didn't really like the Owl Mage Trilogy, which she co-wrote with someone, so I wasn't super keen on jumping into another series that was co-written by someone else, even knowing that James Mallory was NOT the one who co-wrote the Owl Mage Trilogy).  But of course, The House of the Four Winds caught my eye.  It has a super attractive cover (I found this noted in a few Goodreads reviews I read earlier today).  And it sounded really great: a princess pretending to be a boy goes on a swashbuckling adventure!  Featuring pirates!  Mutiny!  Love!  All that fun stuff.

Clarice Swansgaarde is the oldest princess of twelve. Her country is tiny, and giving all twelve daughters a dowry would bankrupt the treasury. So her family agrees that on their eighteenth birthday, each princess will go into the world and make her own fortune with her chosen skill. In Clarice's case, she has chosen to master the sword. And so she decides to become a sword instructor. But first she wants to have adventures in order to build her reputation. Deciding travel will be difficult as a lady, she masquerades as Clarence Swann. Heading to the New World on adventure, she books passage on Captain Sprunt's ship where she meets Dominick, the navigator.
Although Clarice and Dominick become fast friends, the voyage is difficult. Sprunt has been inciting the crew to mutiny. And when they do revolt, and Clarice kills him to save Dominick, the remainder of the crew must turn pirate to survive. Knowing that they are in danger if they head home, they decide to follow a magical map Sprunt had, they find themselves at a mysterious pirate port called the House of the Four Winds on the island of Dorado. And they will have to use all of their wits to survive, especially when Shamal, the Lady of the House enchants Dominick and takes them all to the ends of the earth for a magical treasure that will make her the most powerful mage in the world.

I'm not going to lie: I enjoyed The House of the Four Winds, but it didn't wow me. Although it's not a long book (about 330 pages), it feels like it takes a long time to get to where it's going. The characters all seemed rather mediocre in character. For a swashbuckling tale, not a whole lot of swashbuckling really took place. And while the stuff with Shamal was somewhat interesting, in the end it was rather confusing and somewhat fell flat, much like the end did. I would've loved to know what happened once the crew got back to a civilised port (and what exactly Clarice would tell her parents).

Oh yeah, and how exactly did Clarice make it through almost the entire book without ANYONE realizing she was a girl? I thought that at least Dr. Chapman would've figured it out!!!

So overall, while enjoyable enough to read, The House of the Four Winds is by no means a favourite of mine. It didn't even make me want to read any further books in the series (if/when they come out).
Posted by Shauna at 3:10 PM