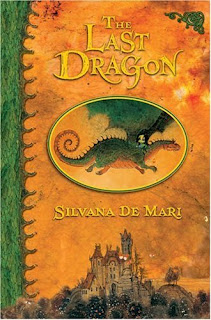 I managed to misplace my copy of Silvana De Mari's The Last Dragon. The book is still on the List, but I have no idea what I did with it. Luckily the library has a copy, so I've started reading that copy instead of mine.

The Last Dragon is about a young elf named Yorsh. Yorsh's village was destroyed by rain. So Yorsh finds himself travelling anywhere to get away. Unfortunately the world he's in isn't a friendly one, particularly for elves. But luckily he finds some good people to help him: Monser the Hunter, Sajra the woman who saved him from starving, and her dog. Together they discover a prophecy about the last elf and last dragon getting together and saving the world from the heavy rains. And so the four of them set off to find the dragon.

Part one is actually where that all takes place. I found it absolutely hilarious because poor Yorsh is extremely young and naive (and only knows what his grandmother told him about humans). He sees the world with a sort of wide-eyed wonder that only the really young seem to have (which leads him to charm a troll by earnestly insisting that the troll is handsome). He also has a hard time understanding the stupid humans to hilarious effect (like calling Sajra a "woman-fool" or thinking the Judge Administrator of Daligar and Surrounding District's title is his lovely name).

So imagine my surprise when Part 2 of the book starts and Yorsh has been living with the dragon for 13 years. Oh yeah, and we're suddenly followibg Sajra and Monser's orphaned daughter, who is living in the House of Orphans in Daligar.  Of course, this is the part where the second part of the prophecy takes place (where the last elf will marry the daughter of the two humans who _____ him).

One thing that was really interesting about this part of the book was the dragon.  Apparently at the end of their lives, dragons brood an egg for just over 13 years.  During that time, they pass their memories to their egg; the baby dragon inherits them when it first flies.  While interesting, this sort of took away from the one thing I loved about part two: the baby dragon was hilarious, and Yorsh trying to teach him was hilarious, too.  But as soon as he flew, the baby dragon was suddenly seemingly older and wiser than everyone else, becoming patronizing and sarcastic.  It was a total 180 from the sweet and cute baby dragon he was before that time.  It also meant the book didn't get to be about Yorsh and the dragon flying around and having learning adventures together.

I'm sure it's obvious, but I'll state it nonetheless: part one of The Last Dragon was ridiculously cute and funny, and part two I really wasn't fond of.  I actually found part two to be a bit of a slog.  But I did manage to finish it, so that's something.
Posted by Shauna at 3:03 PM