Where is my Sister? 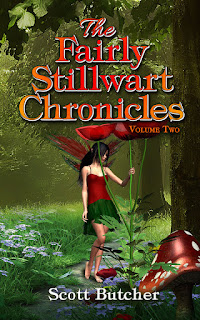 Well this is it, the last book in Scott Butcher's Fairly Stillwart Chronicles, Where is my Sister.

Where is my Sister was an extremely odd book in the context of the Fairly Stillwart Chronicles.  Stillwart disappears very early on in the story, and remains mysteriously absent for the majority of the book.  Appleblossom and all of Stillwart's friends and family are left worrying about Stillwart for seven years.  Appleblossom and Nightwood, the pixie knight who was sent by Queen Pridella to bring Stillwart home, look for the missing Stillwart.  But Appleblossom is forced to abandon the search because she has been absent from the South too long; as Queen of the Southern Fairies, her people need her to come home.  Nightwood agrees to continue the search for Stillwart; Appleblossom hears from him for a few years, but then he, too, disappears.

Stillwart is gone without a trace for seven years, the length of time that the Magic Sisters (the daughters of the helpful human) are serving the Morrigan.  At the end of their servitude, they bring Appleblossom some visitors from the North: Stillwart and company!  It turns out Stillwart made a deal with her brother to avoid the war he was starting in the North.  He agreed to surrender to Queen Pridella if Stillwart disappeared.  During these seven years, Stillwart has been helping the Morrigan.  But her brother decided that Stillwart doesn't have to stay hidden anymore, and so she has come back home to the South and to her heart sister, Appleblossom.  Stillwart is also taking her place as the Queen of the Southern Pixies, which she always has been, even if no one realized it.

One thing that I liked about Where is my Sister is that I didn't have a hard time keeping track of characters.  In my first two posts about The Fairly Stillwart Chronicles: Volume 2 (Tory Blithe and the St. John's Pixies and The Hidden Chronicle), I noted that this was a bit of a problem because there were a ton of characters around all the time.  Where is my Sister dialed back the number of characters who were around, which was a really good thing.

One thing that I really disliked about Where is my Sister is that the majority of the action is just told to us after the fact.  Sure, Appleblossom and Nightwood spend some time looking for Stillwart at the beginning of the story.  But Nightwood (and Stillward herself) only tell Appleblossom and the reader where Stillwart has been hiding after the fact.  We aren't shown any of it.  We don't even get to see Nightwood's quest to find Stillwart because the narrator of this story is Appleblossom.  Appleblossom was a fine secondary character, but as narrator (especially of this particular story) she falls short: she ends up going and living her life, worrying about Stillwart but ultimately being unable to look for her.  A better choice of narrator would have been Nightwood, who was actively searching for Stillwart.  Or even Stillwart herself.

Another thing that I really disliked was that like in Tory Blithe and the St. John's Pixies, we don't get to see much of Stillwart.  This time I felt like we saw far more of the Magic Sisters than we saw of the fairies and pixies, which was really unfortunate; I was reading this series for the spunky Stillwart and company, not for the magical humans.

So unfortunately, as much as I loved the first few books in the Fairly Stillwart Chronicles (especially A Pixie Pilgrimage and The Scotti and 'Fairies Don't Exist'), I found the latter three, and in particular Where is my Sister?, to be disappointing.
Posted by Shauna at 1:02 AM