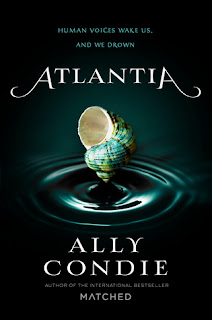 A friend at work was taking Ally Condie's Atlantia out and I happened to read the back.  It sounded so interesting that I had to take it out, too.  Here's the synopsis:

Can you hear Atlantia breathing?

For as long as she can remember, Rio has dreamt of the sand and sky Above—of life beyond her underwater city of Atlantia. But in a single moment, all her plans for the future are thwarted when her twin sister, Bay, makes an unexpected decision, stranding Rio Below. Alone, ripped away from the last person who knew Rio’s true self—and the powerful siren voice she has long hidden—she has nothing left to lose.

Guided by a dangerous and unlikely mentor, Rio formulates a plan that leads to increasingly treacherous questions about her mother’s death, her own destiny, and the complex system constructed to govern the divide between land and sea. Her life and her city depend on Rio to listen to the voices of the past and to speak long-hidden truths.

I ended up taking the book out from the library before Christmas, but just got to reading it a few days ago (I actually finished it last night).  And I have to say...I was actually tempted not to finish it.  The first chapter really caught my attention, but then the book got rather boring for quite awhile.  Rio's sister goes Above with no explanation.  Then multiple people offer Rio help and she turns everyone down attempting to do her thing on her own.  Or using them to get her information but keeping things from them because of reasons.  (Some of that was the secret that she was a siren, some of it was literally *reasons*).

Somewhere in the middle, I did manage to get interested *enough* in the plot to keep going.  But that had nothing to do with Rio.  Mostly it had to do with her aunt (who was this super powerful siren with extra special magic powers) because I was intrigued trying to figure out her relationship with her sister (Rio's mother).  It also had to do with the fact that the city was falling apart and I wanted to know who had caused the damage/what everyone was going to do about it.  Unfortunately the pay off for everything wasn't great, which made me sad.  I don't think I'll be running out to get any more of her books anytime soon.