Batman/Tarzan: Claws of the Catwoman 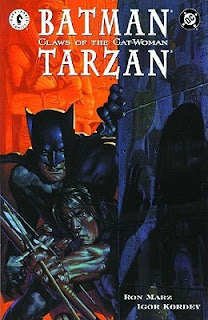 I saw this graphic novel go by at work and thought it would be a fun mash-up.  Batman and Tarzan are actually quite alike in a lot of ways!  They are both orphans who have taken it upon themselves to defend their respective jungles.

This story opens with Bruce Wayne having funded a new wing in Gotham's Museum of Natural History (in memory of his parents).  He has financed a second expedition to Africa so that the explorer, Finnegan Dent, can finish what he started on the first one.  At the wing opening ceremony, Bruce Wayne meets John Clayton, Lord Greystoke (aka Tarzan of the Apes), who had business in New York and so made a point of coming to Gotham for the unveiling.

Later that night, a Catwoman breaks into the Museum to steal some of the artifacts.  She's not Selina Kyle; instead she is Princess Khefretari of the Hidden City of Memnon.  Finnegan Dent found the city and stole many of their artifacts; he's going to use the second expedition to finish his looting.

So Batman, Tarzan (who realized Batman is Bruce Wayne due to his smell), and Khefretari team up to stop Finnegan Dent!