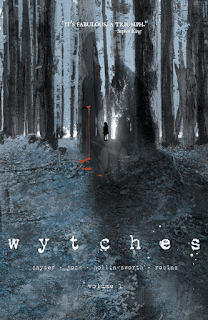 Wow.  What a fascinating and terrifying take on witches.

I can't remember how I stumbled on Scott Snyder's Wytches.  But I am super glad I snagged it from the library (and even more glad that I was able to - it was due back in mid-December and didn't get returned until last week!  I had honestly given up hope, believing it was never coming back!)

Alright, now how to describe this thing?  The Rooks family has moved to a new town for a fresh start.  Lucy, the mother, had been in a car accident that left her unable to walk.  Sailor, the daughter, had been bullied by another girl.  But that girl had disappeared into a tree in front of Sailor.  And because the truth sounds crazy, no one believed her.

But unfortunately, trouble follows them to their new home.  Because Sailor was pledged to the Wytches, ancient beings who will grant you wishes in exchange for food.  They prefer to eat younger people because they are tastier; they cook them in their burrows (in what's called a cauldron - I think the idea was that it's deeper in the earth, so it's using the earth's natural heat to cook you).  As a consolation, you won't even remember the person who was pledged.

Sailor feels like she's going crazy as she starts seeing the Wytches in the woods (and hearing the chit chit chit of their teeth).  Her father wants to help her, but doesn't believe what's going on until a crazy woman breaks into their house after Sailor's gone missing.  With her help, her father will brave the barrow to save his daughter.  But the Wytches aren't going to let their meal go without a fight.

Like I said, this is quite the terrifying but fascinating take on the idea of a witch.  I loved every moment of the story.  The artwork was interesting and suited it as well; unfortunately I did have a bit of a hard time following what was going on at times though.  But still, this was well worth the read.  I'll have to keep my eye out for volume 2!
Posted by Shauna at 1:49 AM