Thor: the Goddess of Thunder 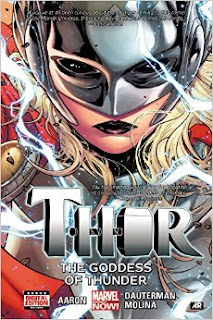 When I read Old Man Logan the other day, I also attempted a couple of other Marvel books. I say "attempted" because I made it through a couple of pages of one and just flipped through the other. I didn't care and really couldn't get into them. So it was with some trepidation that I picked up Thor: the Goddess of Thunder. Apparently I liked the idea of a woman Thor enough to actually give it a shot though. Having just finished it, I'm really glad I did!

Thor has become unworthy of Mjolnir after Nick Fury whispered something in his ear. He remains on the moon pleading with the hammer which he can no longer pick up. But when Midgard is attacked by frost giants, he goes to defend the realm he loves even without his beloved hammer. But then a woman picks it up. Mjolnir has found her worthy and so bequeaths her the power of Thor (including a handy mask to hide her identity).

This was an awesome story and now I want to know who the new Thunder Goddess can possibly be!!! I'll have to keep my eye out for more of this story!!!
Posted by Shauna at 6:12 PM