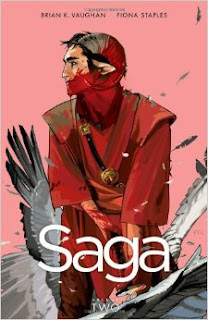 So of course after finishing Saga: Volume One last night I went and put the other four volumes the library has on hold.  And luckily they were all in at the branch I work at!  So I now have volumes two to five to fly through!  :D

Volume Two picks up exactly where Volume One left off.  Marko's parents have shown up.  They knocked Izabel (the ghost teenager who helped them in exchange for going off world with them) onto a nearby planetoid.  So Marko and his mom go to find her.  Meanwhile Alana makes an alarming discovery about Marko's father - he has a terminal illness but refuses to tell his family (he doesn't want his last month to be full of pity).

Meanwhile Freelancer The Will is off moping because the woman he loves, The Stalk, was recently killed.  But Gwendolyn, Marko's ex-girlfriend who works for the Secretary General of Wreath high Command, comes looking for him.  She agrees to help him save Slave Girl from Sextillion as long as he will stop moping and get back to his job (which is to kill Marko and Alana).

Volume Two is full of a lot more backstory than Volume One, which kind of made it not as good in my opinion.  But by "not as good," that basically means it's a 4 or 4.5/5 rather than the 5/5 I gave Volume One on Goodreads.  So yes, I am still excited to be reading this story and can't wait to see what happens next!!!
Posted by Shauna at 10:59 PM