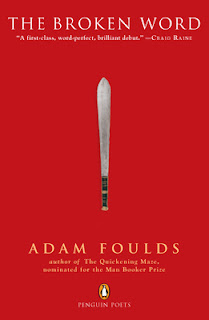 I got to interview Adam Foulds for a blog at work. During the interview we spoke a bit about The Broken Word. It sounded like a really interesting read so I picked it up, but only just got to it now.

The Broken Word is the story of Tom, who comes home to Kenya after high school when the May May uprising is happening. He is brought along to with the men (his father's friends) on a hunting party where he shoots an insurgent to the praise of the other men, who feel he has made it through a rite of passage. From there he finds himself a prison guard for the Loyalists, becoming more and more desensitised to violence. In the end though, he decides to go back to university. But he is changed, having become more brutal and violent as a result of his experiences with war.

The Broken Word is written in verse. When I first started reading it, I admit that I had a bit of a hard time following what was going on. But after getting to Chapter 2 or 3, I seemed to "get it," and started to really enjoy the book. Verse was an interesting yet fitting way to talk about the atrocities of war. The sparseness of the text really suited this tale.

I will admit that the ending felt a bit lacklustre. Up until that point I was willing to rate The Broken Word 4/5 stars on Goodreads. After the last chapter I felt like my rating would go down. But in the end I thought it deserved 3.5/5 stars, which I rounded back up to 4.
Posted by Shauna at 3:30 PM