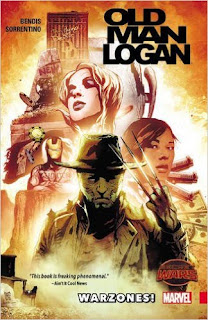 I saw Old Man Logan: Warzones! at work last week. The idea of an old man Wolverine wandering around appealed to me so I put it on hold. (Personally I thought his healing factor means he stays pretty much unaging, but I guess that's wrong). Of course I didn't think about the rest of the premise of the book: Wolverine is in some weird dystopia that is the remains of other realms. I'm not a huge comic book reader, and I tend not to like getting caught up in comic multiverses (except for how it was handled in Supergirl - that was brilliant). And add to that how I found the artwork confusing in a few places (fights of course), and this really wasn't for me.

Logan is in some wasteland. After somehow killing the other X-men, he was peacefully living life with his family until the Hulks killed them. He retaliated, killing all the Hulks except a baby, which he took for himself to raise (I'm actually sad that we didn't get to see this - his Hulk battle would've been quite interesting to read). But then he started going on random other adventures (I have no idea why). When he finds an Ultron head from over the wall, he decides to investigate. This takes him on a crazy adventure to other worlds where people he thought were dead are still alive.

Unfortunately Old Man Logan: Warzones! is book 0. I had hoped that meant it was a standalone; it means it's the prequel story to a series. I will reiterate that this really wasn't a story for me; I will not be reading any further adventures of Old Man Logan.
Posted by Shauna at 12:47 AM