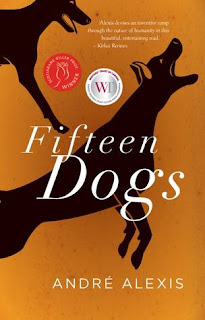 I don't know what to really say about Andre Alexis's Fifteen Dogs other than the fact it was amazing! My brother was telling me about the book when it was on the short list for the Giller Prize and it sounded so-so. But then when I read the back of the book, even though it said the same thing as my brother had, it sounded amazing. So he lent it to me and I finished it yesterday.

Fifteen Dogs starts with a wager between Apollo and Hermes: if any other animal had human intelligence, they would all die in misery, too. So they wander into a veterinary clinic and give the fifteen dogs they find there human intelligence. What follows is the dogs' lives from that point on. They no longer fit into any world because they are physically dogs but mentally different.
And of course, right from the premise, this book is about their deaths.

I loved how the Greek gods kept intervening, too. Interference came mostly from Apollo and Hermes, but all the gods were interested in the outcome. And the Fates and Zeus had some sway in the outcome as well.
It was also interesting how no one was ever the bad guy in this book. Where one dog might seem to be in one chapter, you'd get to see things from their perspective in a later one.

While I admit that I haven't read any of the other books that were on the short list for this year's Giller, I'm glad Fifteen Dogs won. It was phenomenal!
Posted by Shauna at 3:01 PM