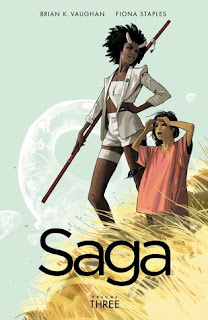 Well here we are: Saga: Volume Three.  Some really crazy things happened in this one!  The Will, Gwendolyn, and Slave Girl landed on a planet to repair their ship before continuing pursuit of Marko and Alana.  But the planet's food infected them all, trying to get them to stay as hosts for some sort of parasite.  The parasite appears to The Will as The Stalk; he almost listens to "her," but at the last minute decides to continue pursuing Marko.  Or at least that is his plan, until Slave Girl stabs him in the neck by order of the parasite (appearing as her mother).  Gwendolyn, with the help of Lying Cat, figures out what's going on. Finding The Will almost dead, she realizes the only person who might be able to heal him is Marko.  So she heads to Quietus where she knows he will be.

But of course, Prince Robot IV has already beaten her to Quietus.  He arrives in the home of D. Oswald Heist, the author who wrote the book that inspired Alana in the first place.  Heist claims he wrote the book for a quick paycheck, trying to cover for the fact that the fugitives are already in his place (and have been for a week!)  Things go horribly wrong when Marko's mother tries to save Heist from the Prince and Gwendolyn and Lying Cat storm in.

Volume Three is another interesting romp by Vaughan and Staples.  I can't wait to see what happens next!!!
Posted by Shauna at 1:22 AM