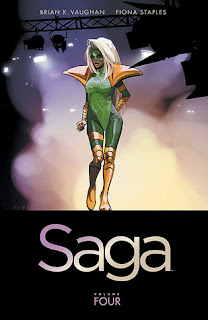 Wow.  Saga: Volume 4 takes place a bit after Volume 3.  Hazel is a toddler now.  Alana has been working for the Open Circuit, which seemed to be a television network.  The troupe wears costumes, so it was a safe place for Alana to make money.  Unfortunately the hours are long and she gets involved in drugs, pushing her further and further from her family.  For his part, Marko tries to give Hazel a normal childhood.  He signs her up for private dance lessons with a woman who likewise has a distant husband.

Meanwhile, Robot Prince IV's wife has their son.  Not long afterwards, a Robot janitor kills her and takes the baby, intending to start a revolution.  Robot Prince IV is informed of his wife's death (although he seemingly has no memory of even having a wife).  He heads first to his father for help.  But getting none from that quarter, he gets help from an unlikely source: Special Agent Gale.  Gale sends him after his son.  Robot Prince IV arrives just in time for his son to blast off in the tree rocket along with Alana, Hazel, Marko's mother, and Izabel.  Marko and Robot Prince IV join forces to find their families.

Oh yeah, and Sophie and Gwendolyn have discovered a spell that might cure The Will!  Now they just need to go about finding the ingredients.

This volume was awesome!  I hope Volume 5 continues at this pace!  (But even if it doesn't, it'll still be good!)
Posted by Shauna at 2:11 AM