A Two-Spirit Journey: The Autobiography of a Lesbian Ojibwa-Cree Elder 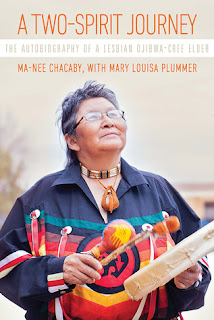 I don't know what's up with my memoir-reading lately.  But after finishing Naked, Drunk, and Writing, I started reading A Two-Spirit Journey: the Autobiography of a Lesbian Ojibwa-Cree Elder by Ma-Nee Chacaby with Mary Louisa Plummer.  A Two-Spirit Journey was hands down the best memoir I've read (or attempted to read) in a long, long time.

A Two-Spirit Journey starts out by giving Chacaby's family's history, then jumps right into her own.  She was born in a tuberculosis sanitarium, then fostered/adopted by a French family.  Her maternal grandmother found her and adopted her, bringing her to their reserve north of Nipigon.  Chacaby had a good childhood with her kokum, but had a hard time with many other people (partially due to her two-spirited nature, which other people did not respect the way her kokum did).  Chacaby had a particularly difficult time once her mother came back into her life; her mother often beat her.  She also suffered horrible sexual abuse and torture from other members of their community.  But the worst came from her husband, whom her mother arranged for her to marry (against both her wishes, and her kokum's).  That man hit her, refused to accept their daughter as his own, and caused the premature birth of their son.  Chacaby eventually walked out on him, taking the children with her to Thunder Bay.  Her life took a downward spiral thanks to alcohol, and her children were put into foster care.  Eventually Chacaby fought to get herself sober, using AA's twelve step program.  She then dedicated her life towards helping other people, both women and youth, reclaim their own lives by getting off the streets and getting sober.  But Chacaby's eyesight, which had always been bad, eventually caused her to lose her job.  But she remained upbeat no matter what life threw at her, eventually finding real love with some extraordinary women.

There's an afterword that explains how the book came to be.  Chacaby narrated her life's story to Plummer.  Plummer is a social scientist who used rigorous methods to ensure Chacaby's life story was useful for social scientists.  There is an interesting discussion about first person accounts written down by other people, and some of the difficulties Chacaby and Plummer had to overcome to make the book readable (when Plummer tried to make it verbatim, some of Chacaby's grammar didn't come across well on the written page).

While I was drawn right into Chacaby's narrative, I found that it lost a little something at the end, when she was trying to summarize and conclude the book.  Other than that, I thought that it was an excellent read.  Chacaby has been through so much in her life, and it is so inspiring that she manages to remain positive in spite of everything.
Posted by Shauna at 1:57 PM