The Hidden Life of Trees: What They Feel, How They Communicate – Discoveries from a Secret World 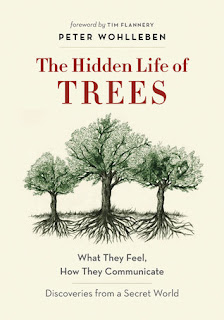 Wow, this has really been a year of reading nonfiction books for me!  I just finished The Hidden Life of Trees by Peter Wohlleben. I was interested in reading it and knew my brother had purchased a copy; he was done with it, so he gave it to me (it was actually a little more involved than that - he had left it at a take a book, leave a book shelf like a day or two before I asked if I could borrow it from him.  He then rescued the book for me, and wrapped it up as part of my Christmas present from him! I was delighted that he was able to get it back!) :)

Wohlleben is a forester who manages a forest in Germany.  Over the years, he made many observations about trees that were directly against people's beliefs.  For example, he found a trunk of a tree that should have been dead centuries ago, but was still alive; the neighbouring trees had kept it alive, giving it food.

His observations have led him to believe that trees are much more active than humans give them credit for - they just live life in a much slower way than we do.  Plus much of what happens isn't visible - it happens either behind their bark or beneath the ground in their roots. Using science to back up his observations, Wohlleben looks at the social life of an intact forest (and also shows how human-planted plantations of trees have a much harder life because the trees are left virtually alone to fend for themselves, without the support of their neighbours).  I found his description of what he calls the "street kids" (the trees we plant in our cities) particularly heartbreaking - these trees are planted where the ground is compacted, so they have a hard time spreading their roots, plus their roots were damaged when they were little all so that humans could more easily handle them prior to them being planted.  And if one of these street kids manages to break through an underground pipe in an effort to spread its roots, it ends up sentenced to death by us because it is inconveniencing our infrastructure.  These poor beings!

While Wohlleben references a lot of science in The Hidden Life of Trees, I felt that in some places he made leaps in logic between fact and what he believed was happening (I can't think of anywhere in particular now, but I felt that during the first night I was reading the book).  A far bigger complaint though is that I found the prose to be really, really dry to read.  After about 40-70 pages, I actually got so bored that I started reading another book. I had to force myself back to The Hidden Life of Trees.  And this is a huge shame, because it really is an interesting read.  It's possible that this is a problem of translation, as the original text was written in German.  But I'm really not sure.

While I don't regret reading The Hidden Life of Trees, because it was full of interesting facts, I wish it had been more engaging.  But I do plan on checking out the notes section more extensively in the future - I'm hoping it will direct me to more engaging texts on the subject.
Posted by Shauna at 10:19 PM