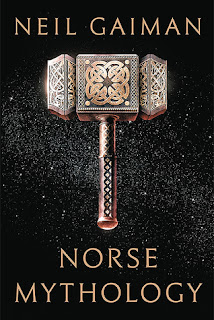 I wanted to read Neil Gaiman's Norse Mythology back when it came out a year ago.  I read a bunch of Norse mythology back in school (it's hard to believe, but it's been eight years since I read The Poetic Edda and The Prose Edda!) and enjoyed it.  So I was interested to see what Neil Gaiman brought to the table.  I started reading Norse Mythology last night and finished it a few minutes ago; it's a super easy and enjoyable read.  It also felt like going back to an old friend because, after reading the two Eddas, all the stories in Norse Mythology were very familiar to me.

Gaiman's Norse Mythology is a retelling of the old Norse myths.  In the introduction he says he took bits and pieces of stories from both of the Eddas to create his versions.  His stories start with the beginning of the universe and how the worlds were created, give us some fun adventures of Thor, Loki, and the other gods, then end with Ragnarok and a glimpse of what happens afterwards.  Most of the stories start with some trickery by Loki, who then has to make things right afterwards.  Most of the stories are rather light romps (although they often end with the death of a bunch of giants because of course that's how stories with Thor will end), but the end few are much darker in tone.  Gaiman has modernized the tales a bit in his retellings (particularly the dialogue); in his introduction he said he tried to imagine himself back a long time ago in the lands where these stories were first told, but often the dialogue is much more modern than you would expect from that (like in "The Master Builder," Freya says to Loki "You talked these idiots into it" - that phrase sounds really modern). I don't think that this takes away from the retelling, but I did want to point out that it is there.

Overall, Norse Mythology is a quick and fun read if you are interested in or enjoy mythology (particularly Norse mythology).  I can see why everyone loved it when it first came out last February. :)
Posted by Shauna at 2:34 PM