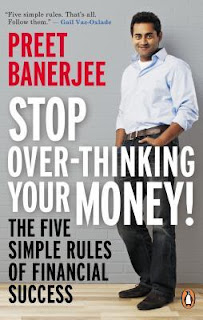 Well, now I appear to be on not just a non-fiction kick, but a personal finance kick as well. After reading The Simple Path to Wealth, I wanted to read something that was Canadian rather than American.  I found a list with the best financial books for Canadians; Preet Banerjee's Stop Over-Thinking Your Money! The Five Simple Rules of Financial Success was very highly rated on the list.  And the library had it, so I decided to give it a read.

Banerjee has five simple rules (which are hard to implement):
As you can see, these are, for the most part, pretty obvious rules.  I mean, spending less than you earn (and saving the rest) makes sense because how can you be financially successful if you are in debt and paying high interest rates?  Paying down your high-interest debts also makes sense for the same reason (how can you save when you're paying lots in interest?) And delaying consumption means you can save up the money to buy something rather than taking a loan out (and having to pay interest).

The other two rules were eye-opening though.  I've never thought about getting disability insurance or life insurance before.  But statistically 1 in 3 Canadians will be off of work for a few years in their lifetime, so disability insurance really makes sense.  And life insurance definitely makes sense if you want to make sure your family is taken care of after you die.  The other rule also makes a lot of sense - read the fine print so you aren't surprised by anything (like in his examples where someone thought they had insurance coverage, but in fact they did not).

After the rules, Banerjee goes into a bit more detail on investing, finding a financial advisor, and insurance.  I will admit, some of these chapters were a lot harder to understand than the first few (but I will also admit that I mostly read this book late at night while I was sleepy, so that most definitely didn't help).  Banerjee's discussion of financial planners was really good though; he advocates for a proper financial advisor who will help you with an overall financial plan, whatever your goals.

Banerjee finishes off the book with a bigger discussion on Insurance.  It was really interesting looking at how the companies come up with their premiums (and why premiums go up as you age).

A major flaw of this book was that there was no bibliography or further reading list.  Banerjee throws out a bunch of book recommendations that I had to write down on the spot because there was no handy list to refer to or photocopy at the end.  But at least now I've got a bunch more books I want to read!

Overall, I thought this was a great book on personal finances for Canadians, particularly people who are just starting out thinking about saving and don't know where to start.  His rules are simple, but do be prepared: they can be hard to implement.
Posted by Shauna at 10:12 PM