The Rise and Fall of the Dinosaurs: A New History of a Lost World 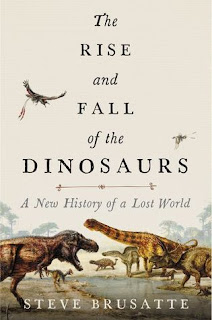 Well, here we are: in finishing Steve Brusatte's The Rise and Fall of the Dinosaurs: A New History of a Lost World, I also finished my 2018 Goodreads Reading Challenge!  I can't quite remember where I first hears about The Rise and Fall of the Dinosaurs, but I remember it sounding good.  The library had it on order, so I put my name on the list.  I've had it out for quite a while, and was actually thinking about returning it because I just didn't seem to have enough time to read it.  But over the course of the last week I've been a bit sick, and had a bit more reading time.  I actually chose to bring The Rise and Fall of the Dinosaurs yesterday with me to a walk in clinic (I got through a good third of the book just sitting there waiting!)  So as much as being sick sucks, I can directly thank it for getting through this book (and getting through my Reading Challenge this quickly - I finished 397 Ways to Save Money, and read Worry-Free Money all while at home sick!)

The Rise and Fall of the Dinosaurs is an interesting read.  Yes, it goes through dinosaur history from how dinosaurs got their start in the Triassic period (their ancestors evolved prior to this, but the first true dinosaurs didn't appear until the mid to late Triassic), to when they died out 66 million years ago when the asteroid impacted (and Brusatte backs up why the asteroid is the accepted reason why the majority of dinosaurs went extinct).  He tells of the wonderful diversity of dinosaurs, how evolution made some of them possible (like the gigantic sauropods and Tyrannosaurus rex), and even how they evolved flight (and by extension, became birds).  The Rise and Fall of the Dinosaurs also tells about the people who made these discoveries and how they determined how these animals lived.

I think some of my favourite sections were the chapter on Tyrannosaurus rex, and the discussion of sauropod lungs (which happen to be the same style of lungs that both the T. rex and modern birds share).  The discovery of feathers and how we can now tell the feather's pigments was super interesting too.  Oh, I'm not going to lie - I found the whole discussion of dinosaurs from their ancestors, the archomorphs, right through until the extinction event at the end of the Cretaceous fascinating.

I did have a bit of a hard time with keeping all the scientists straight though.  Part way through I found myself really wishing Brusatte had included a who is who list somewhere (like a dramatis personae in plays) just to help keep everyone straight.  Actually, I found myself wishing for something like that with the dinosaurs he mentioned, too.  Some of them were easy to keep straight (like different sauropods and theropods), but I kept getting confused with many of the other, less-familiar dinosaurs.  Oh, and I really liked the dinosaur sketches and the random pictures Brusatte included; I would have loved to see more!

I was also happy that he included a brief epilogue about what came after the dinosaurs.  Apparently life sufficiently recovered within about a half-million years after the Cretaceous extinction event.  So that's promising, whatever happens after us (if humans don't manage to stop the horrible extinction-event we've set in motion).

All in all, The Rise and Fall of the Dinosaurs was an entertaining and informative read.  I'm really glad I read it, rather than sending it back to the library unread!
Posted by Shauna at 5:54 PM