Just Cool It! The Climate Crisis and What We Can Do 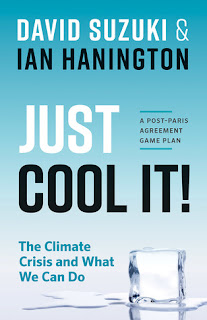 Continuing on with the books I've had out from the library for awhile that I was considering returning, here is Just Cool It! The Climate Crisis and What We Can Do by David Suzuki and Ian Hanington.  This one I actually started reading a few weeks ago, but stopped for some reason (I honestly can't remember why).  Then after finishing The Rise and Fall of the Dinosaurs, I decided to restart reading this book.

The climate crisis has been a huge concern of mine for the last while, so I was very interested in reading Just Cool It! when I first encountered it.  I liked the idea that it isn't just doom and gloom about the future, but that it has a game-plan for tackling global warming.  Also, I've read some of Suzuki's articles in the local paper, so I was interested in reading a full book authored by him (and Hanington, who I will admit I have never heard of prior to this book - on Goodreads it says he is the senior editor at the David Suzuki Foundation. Makes sense).

Just Cool It! is split into two parts.  Part one talks about the climate crisis in detail, looking at the science that supports it, the consequences from it, and the many barriers that prevent us as a species from dealing with it.  Part two is all about the many solutions, looking at personal, agricultural, technological, and institutional solutions that are possibilities moving forward.  The book examines the pros and cons of all of the proposed solutions and makes recommendations on which ones offer the best hope for the future (just so you know, the book has a very clear bias towards getting society off of fossil fuels in favour of renewable resources like solar and wind power - this argument is consistently made in the latter half of the book).

I really liked how Just Cool It! was broken down, both in terms of the challenges and the possible solutions, and in terms of looking at the individual proposed solutions.  In a lot of ways I found this book rather inspiring - even though we have waited so long to confront this issue, the fact that globally people are starting to and that there ARE possible solutions helps to lessen the dread I feel for the future somewhat.  That being said though, this book is a bit on the dry side and is rather repetitive, to the point where it felt like paragraphs were copied and pasted from one part of the book into another.  There were also points where something was discussed in a previous section, then mentioned and defined in a later section (I'm looking at you, life cycle analysis - this was mentioned and defined on pg 205, and linked back to the discussion on biofuels on pg 194, where it was mentioned but not defined). Just Cool It! really could have used some better editing.

All in all, I thought Just Cool It! was a good, comprehensive look at where humanity is at in terms of the climate crisis.  While a little dry and repetitive, it's a relatively short and quick read, so it'll get you up to speed in the crisis in no time!
Posted by Shauna at 3:08 PM