This Changes Everything: Capitalism vs the Climate 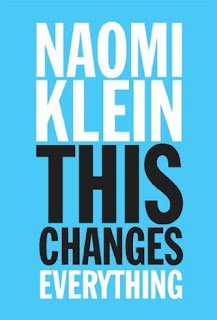 Awhile ago, my brother recommended Naomi Klein's This Changes Everything: Capitalism vs the Climate to me.  I can't remember exactly why now, but I think it was because I had just read another of his recommendations, A Short History of Progress, and he felt that Klein's book would similarly change my outlook on the world. I'm not going to lie, but I've put off reading This Changes Everything for the stupidest of reasons, primarily because the book is big.  It’s 466 pages of text, plus notes and index, which brings it to a whopping 566 pages in total.  566 pages of much denser reading than most fiction.  And even though I won’t be reading a lot of the extras, 466 pages is still the equivalent of two shorter books.  And when I was worried about making my Goodreads reading challenge over the last few years, I was far more worried about quantity than quality.  Heck, even this year, when I pledged to read just 25 books, I still waited until I was finished reading those 25 books before actually starting to read This Changes Everything.  But it's been coming up more and more in the other things I've been reading (I can't remember the exact count, but I know David Suzuki and Ian Hanington mentioned it several times in their text).  So I took This Changes Everything out from the library a second time and actually started reading it.

Of course, after starting I came across a fact in the introduction that said humanity has to get our emissions under control by 2017.  And I knew I should have read this book far sooner.  But such is life; better late than never, right?

But that model of economic thinking is starting to fall apart.  People everywhere are starting to realize that we can't take and take from nature (because nature will start fighting back and humanity WILL NOT WIN).  The sacrifice zones have also started getting bigger and more widespread in the quest to extract as much fossil fuels as possible from the earth, and more people are saying "not in my backyard."  People with diverse backgrounds and beliefs are starting to fight against this extraction together (in what Klein calls "Blockadia").  She believes that people need to fight against big fuel and fundamentally change the economy to make it more cooperative and fair (in a way that movements over the last century or so have been fighting).  This is the last decade where we can halt even more dramatic climate change, so Klein hopes that everyone will be able to rise up together to stop it; otherwise we will lose our shared home due to corporate and billionaire greed.

I will admit, This Changes Everything is a difficult read. For one thing, it is very heavily fact-based, which makes it a bit tough to get through quickly.  But This Changes Everything will also fundamentally upset you at how very unfair the world is (and has actively become over the last few decades).  I was close to tears when I read the first few chapters and discovered that the economy was built in a way to ignore the environment, and that the environment was either ignored in trade agreements or actively taken out of them.  I was furious to hear how people are often beaten down by the lobbyists from fossil fuel industries.  And how our governments have worked hand in hand to lock our countries into fossil fuels through infrastructure decisions (even while the technology has existed and gotten good enough that we could have been working towards switching our societies to clean energy long before now).  But after those first few chapters, the book starts to look up: people in greater and greater numbers are starting to stand up to the fossil fuel industry and change the way things work.  Klein is hopeful that we will not squander this critical mass of people and instead use it to build a better future for everyone.

So while This Changes Everything is in many ways a difficult read, it is still very much worth reading.  It will teach you just how much our current political environment has forced us down this path (even though scientists have long known that global warming was happening and that we needed to change our ways), and will get you thinking about how we can move forward together.
Posted by Shauna at 5:05 PM